Listen up, pals, there’s only two days left of this godforsaken year that we call 2021, which means you need to round up your gaggle of gays and start planning for tomorrow’s celebrations. So, with that in mind, let’s cast our minds forward to New Year’s Eve (which is like Halloween…it’s the only other night a year when gays can dress like total sluts and no other gays can say anything about it).

Without further ado, here are our top picks for New Year’s Eve in Brisbane, Sydney and Melbourne…consider it A Modern Gay’s Guide to New Year’s Eve 2021.

Option 1 is a classic – Fluffy. This year, 2021, Fluffy is hosting their annual New Year’s Eve party at The Warehouse (aka the venue in which Fluffy used to be held). And this year the theme is ~Neon Fantasy~, so pull out that early-to-mid 2000s Supré get up that you’ve got hiding in your bottom draw, because neon’s back, baby. Featuring the iconic Paulini, and some of Brisbane’s best drag queens (think: Luna Thicc, Freya Armani, Kim Schotte, et al.), general tickets for this New Year’s Eve celebration start at just $50, while all-inclusive packages are $120+.

Now, if Neon Fantasy isn’t your thing, or if you’re trying to save a little money on entry fees this New Year’s Eve, The Wickham is the place for you. This year, The Wickham are giving you the chance to give those high-school days the middle finger with their very own Wickham Prom. Whether you wish you wore something different, asked that date you wanted to or wore a more daring look to your prom or formal – The Wickham Prom is your chance for a re-do! There’ll be photo booths, balloon drops, DJs and performances, and entry is free, but bookings are essential.

Poof Doof Sydney are shaking things up a little bit this year, with their celebrations happening as part of Sydney’s New Year’s Eve In The Park at Victoria Park. As is to be expected, they’ve got their very own LGBTIQ+ side stage, with the biggest and best queer DJs (like Sveta, Charlie Villas, Troy Beman and Pablo) playing and the biggest and best drag queens (like Coco Jumbo, Felicia Foxx, and Tyra Bankstown) performing. This one is definitely for the partygoers, so turn a look and and don’t get caught out by the heckling queens on entry – those divas are looking to roast anyone who dresses beige to New Years Eve!

The Imperial Erskenville are letting you choose your own adventure this year with three different packages for three different types of NYE partiers. If ya’ basic, there’s a general admission ticket, which grants you access to the main bar from 10:30pm. But if ya not-so-basic, try out either the Glitz and Glam Production Show package (which gives you a cocktail on arrival, a three course meal and admission), or the Dusk to Dawn package (their VIP experience hosted by Etcetera Etcetera and giving you exclusive access to their oh-so-italian-chic UP til 10pm, 5 hours of drinks, premium canapes, drag hosts/pop-up entertainment and much more). Either way, book your tickets ASAP to avoid missing out.

Let’s doof into 2022, pals! Poof Doof Melbourne KNOWS we love to bring in the New Year with a bang, so they’re delivering the biggest bang south of the Yarra. A cultural reset some would say. And this one’s pretty straight forward – there’s no fancy packages, no guest lists, nothing. Just good old-fashioned performances from 9pm until 6:30am the next morning, including performances from the likes of Melbourne’s very own Jolyon Petch, Casey Leaver, Acraig, Luke Tatterson, Tory Allen, and drag legends Daytona & Amena Jay! Just make sure you’re in the club for your midnight pash, or you’ll literally hate yourself.

Sircuit & Mollies are teaming up again this year for their New Year’s Eve shenanigans. These iconic Smith Street venues are inviting you into their ‘Together Again’ party to celebrate the end of 2021 and start off 2022…you guessed it…Together Again. Of course, there’ll be DJs and performances throughout the night across both venues (Sircuit & Mollie’s, that is). Plus, they’re both open until 3am, with DJs Argonaut, and David Virgona and drag queens Leasa Mann and Tequila Mockingbird bringing you into the new year.

Next A Modern Gay's Guide To Midsumma 2022 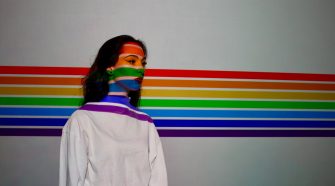 What is Rainbow Washing?