World AIDS Day was first held in 1988. Since then, it has been recognised and observed by millions of people in more than 190 countries around the world, which is a pretty big deal.

This year – in 2021 – there are a number of themes (depending on who you ask). Down Under, we are commemorating 40 years since the first case of HIV was (retrospectively) diagnosed in Australia. So, for us living in Australia, the theme is ‘40 years of HIV – where to next?’. Elsewhere, the UNAIDS theme for World AIDS Day 2021 is ‘End Inequalities. End AIDS. End Pandemics.’

However, both themes are bringing awareness to very similar issues.

In Australia, by thinking about where we’re going next, the idea is for us to not only educate ourselves about HIV and take action to reduce the transmission of HIV, but also to ensure that people living with HIV can participate fully in the life of the community, free from stigma and discrimination.

For UNAIDS, their aim is to stop new HIV infections, ensure that everyone living with HIV has access to HIV treatment, protect and promote human rights, and produce data for decision-making.

And to do all of these things, the World AIDS Day Australia website says that we, as a community and as individuals can make a significant impact, “working in partnership with people with HIV, we can encourage others to understand how HIV is transmitted. We can support people to access testing, treatment and care, as we know that commencing treatment at the early stages of HIV results in better health outcomes and reduces the likelihood of onward transmission.

But how can you actually do that? And what steps can you take to commemorate World AIDS Day with the community?

Around Australia, there are a heap of virtual and IRL events leading up to 1 December, like morning teas, virtual tours of the AIDS Garden of Reflection in Canberra, memorial days, candlelight vigils, and a HIV-101 crash course. Just head to the World AIDS Day Australia website for all the good bits.

In addition to supporting these events, you’re also urged to wear a red ribbon – the international symbol of HIV awareness and support – on 1 December, start conversations online and IRL, and donate to charities like ACON’s Red Ribbon Appeal.

Because even a donation as small as five dollars can help organisations like ACON provide those at-risk with safe-sex packs to ensure the community stays safe, while bigger donations (like, we’re talking $250 plus) can help to cover six months of support for those recently diagnosed with HIV.

Next Interview With FLETCHER 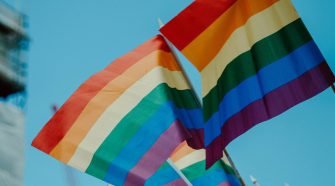