Kita Mean chats about the moment the world stood still, how Drag Race changed her, what she’s splurging her prize money on, and if she’s found love.

The 34-year-old who hails from Auckland walked into the competition with her effervescent personality and a cheetah print hat filled to the brim with confidence. Much like her namesake, Kita had her ups and downs, but in the end the adventure was worth it. Not only did she win the crown, but she also won the hearts of her sisters and audiences.

Kita walked into the competition confident of her star power, saying, “before we started filming, I went into it being like ‘I know I can win this. I know I’ve got a uniqueness. If I can showcase it properly, then I can take it out,’ So, I went into it confident, not cocky. Confident that if it all fell in my favour, I could do it. But then as soon as the competition started, I was like ‘ohhh fuck, it’s all over.’”

Weeks went by with no wins in her pocket. Her business partner and fellow competitor, Anita Wigl’it, made an early exit and the front runners continued to extend their leads. The fiery confidence that Kita walked in with was slowly being stifled.

She says, “every week. I was so hard on myself. Honestly, it was really hard for me mentally because I thought I was failing everything. When I tell people this, they don’t understand. They say, ‘but you were never in the bottom?’ But I always thought, ‘I’ve ruined it.’ I knew I wasn’t performing how I would have liked to be performing and I was so hard on myself.” She was convinced that every week, would be her last.

Struggling to find her footing in the competition, the queen says that if she could go back and talk to her inner saboteur, she’d say, “come on Kita, snap the f*ck out of it, you crazy b*tch!”

As the flames of her confidence had turned into embers of self-doubt, Episode 6 (Family Resemblance) breathed new life into Kita. Winning the Family Resemblance challenge reignited that fiery confidence that she’d lost on her way. Rising like a phoenix from the ashes, she spread her wings and flew. She divulges, “coming into the last couple of episodes, I started to really be like ‘okay, now I’m starting to get a handle on the this, I could really take it home.’”

For much of the shows inaugural season, Scarlet Adams was the queen to beat. Winning the most challenges and garnering favour from the judges at almost every turn. Kita knew Scarlet was her biggest competition, saying, “she’d won so many challenges and she’s so talented,” adding, “we definitely serve two very different perspectives with our what our drag aesthetic is and where we are in our lives. So, I knew it would probably come down to who RuPaul wanted to crown really.”

During the finale catch up with Mama Ru and Michelle Visage, Kita admitted a secret that she’s kept tucked away for a long time, revealing that she’s always had a yearning for that special someone, saying, “I’m desperate for love…. and I don’t know where that stems from.”

Since leaving the show, Kita says that’s a sentiment that she still holds, stating, “I always have, and I think I always will. I think even when I find it, I’ll still be that emotionally needy, annoying boyfriend. I think it’s just gonna be a part of me forever.”

Did someone say The Bitchelor Season 2 starring Kita Mean?

The ever-evolving Kita says the scene where she said she felt like she’d “regressed” was taken out of context, explaining, “that was in reference to basically when I first started doing drag, I was excited about drag but I really just started to understand myself a bit more. And it was exciting but scary but a pivotal part of my life, where I began to change and become the new version of myself. I felt like in the competition, it was the same thing. It was reminding me of that same moment in drag when knew I was coming into something fresh. It was scary and exciting though.”

Kita, who won the title of Down Under’s First Drag Superstar and was crowned on Saturday night, says that the moment she won was “totally mind blowing,” but that, “It hasn’t hit me yet, I know eventually it’s probably gonna slap me in the face and I’m probably just gonna wake up screaming. I haven’t had a chance to fully absorb yet.”

To prevent spoilers about who wins the season, the final four typically all film separate endings, where they all get crowned the winner. Only finding out who the true winner is when it’s aired live on TV. Kita says, “It was weird because I knew when we filmed it there was four versions, right. We’ve filmed like alternative endings. So, in some weird way, I was kind of expecting to hear the other versions. It was hard to compute that that was the outcome,” adding, “they’ve just said my name and I’ve just won it. It was taking a while to really process. I truly felt like time stood still in that moment, as I was trying to get my head around it.”

Kita declares she learnt many things watching herself back on TV, “I learned that when I smile, I have the most ridiculous crow’s feet on my face. So, I need to seriously get that shit pulled back and stapled into place,” she laughs.

After some banter about now having the funds to shout a wig for her hometown sister Elektra Shock who sported some wigs that Tatiana from Drag Race US, would call #choices, Kita admits, “A lot of the nice wigs that (Elektra) wore, I actually lent her for the show. She said she needed to borrow some wigs for something, and I was like ‘girl like you know you are drag family, you come and borrow whatever you want,’ so a lot of the jewellery she wore, a lot of the wigs she wore were actually mine… just none of the ugly ones.”

Kita, who walked into the workroom with the entrance line “How Delightfully Camp,” says that now that her old drag doesn’t fit anymore, she’ll be spending her winnings on some new fits. So hopefully that means more animal print hat and blazer combos. Now THAT’S delightfully camp!

The first crowned winner of RuPaul’s Drag Race Down Under has had a metamorphic journey, but promises she still knows where her heart lies, saying, “I’m just gonna stay true to what I’ve done, what I always do, which is love drag! I’m just gonna continue performing and continue laughing, but just do it on a bigger stage.”

If you’re itching for your next dose of Kita Mean, check out her new self-titled track ‘Kita Mean,’ it’s sure to be an out of body experience.

Next What is Gay Cruising? 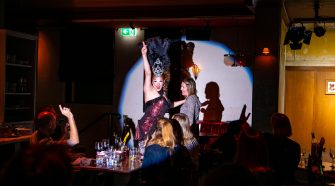