‘Years & Years’ lead singer and Netflix smash-hit ‘It’s a Sin’ star, Olly Alexander, talks all things coming out, his mental health amidst lockdown, and the lead-up to working with Australia’s very own Kylie Minogue, on his new single ‘Starstruck’.

The Olly Alexander we know and love today first came onto our radars way back in 2014, when he and fellow band members Mikey Goldsworthy and Emre Türkmen released two of the catchiest songs of that year – Real and Sunlight. If you don’t know what I’m talking about, then you’ve got exactly 7 minutes and 13 seconds to go away and listen to them – that’s an order!

Between then and 2019, the trio released two albums: Communion (the album that the chart-toppers ‘King’ and ‘Shine’ came from) and ‘Paolo Santo’ (the album that the forever catchy ‘Sanctify’ and ‘If You’re Over Me’ came from). Along the way, they also released a few other singles – like ‘Meteorite’ from the Bridget Jones’s Baby soundtrack and ‘Play’ with Jax Jones – here and there for good luck I guess.

Since 2019 however, we’ve heard nothing from them. Nada. Naught. Zip. Zilch. That is, until it was announced that Olly Alexander himself would be playing the devilish Richie Tozer in Russell T Davies’ miniseries, ‘It’s a Sin’.

About that, Olly reckons, “It’s a Sin was just like, such a life changing experience,” and that, “one of the amazing aspects of it was immersing myself in all that 80s music, because I love that period of music anyway. I have always loved that era, but I’d listen to it almost every day with the other cast members. We all had our own playlists and we’d just dance around in our trailers to the songs.”

…Dancing along to throwback bops in a trailer with Olly Alexander? BRB, just going to cry of jealousy.

Speaking about the music from It’s a Sin, Olly says what we were all thinking, “the TV show itself has such a great soundtrack, and so I just fell in love with those songs”, before adding that all of these incredible songs – in one way or another – influenced the vibe of Years & Years’ upcoming third album, “you know, like Annie Lennox, The Pet Shop Boys, The Human League, Donna Summers. I mean, their songs are just incredible, and so I tried to capture some of that spirit as well as that kind of like ecstasy on the dance floor and, like, liberation. I really hope people get some of that.”

In April of this year, we got a sneak peek of that ecstasy on the dancefloor vibe with Starstruck, the first single from Years & Years’ upcoming third album. Starstruck, Olly reveals, was born out of the feeling that he, “just wanted to make something that was really positive – just good vibes, no bad feelings – about that rush when you first meet someone and you’re just so blown away by them that it puts you in this, starry, cosmic feeling,” adding that, “I wanted to kind of create that energy for myself as well because I felt a bit flat during the pandemic, if I’m honest.”

Olly shares that the same vibe we get from Starstruck is woven throughout the rest of the album too, emphasising that, “Starstruck is a pretty good indication of the music. It’s all pretty like, up-tempo stuff you can dance to… the theme is like seduction.” 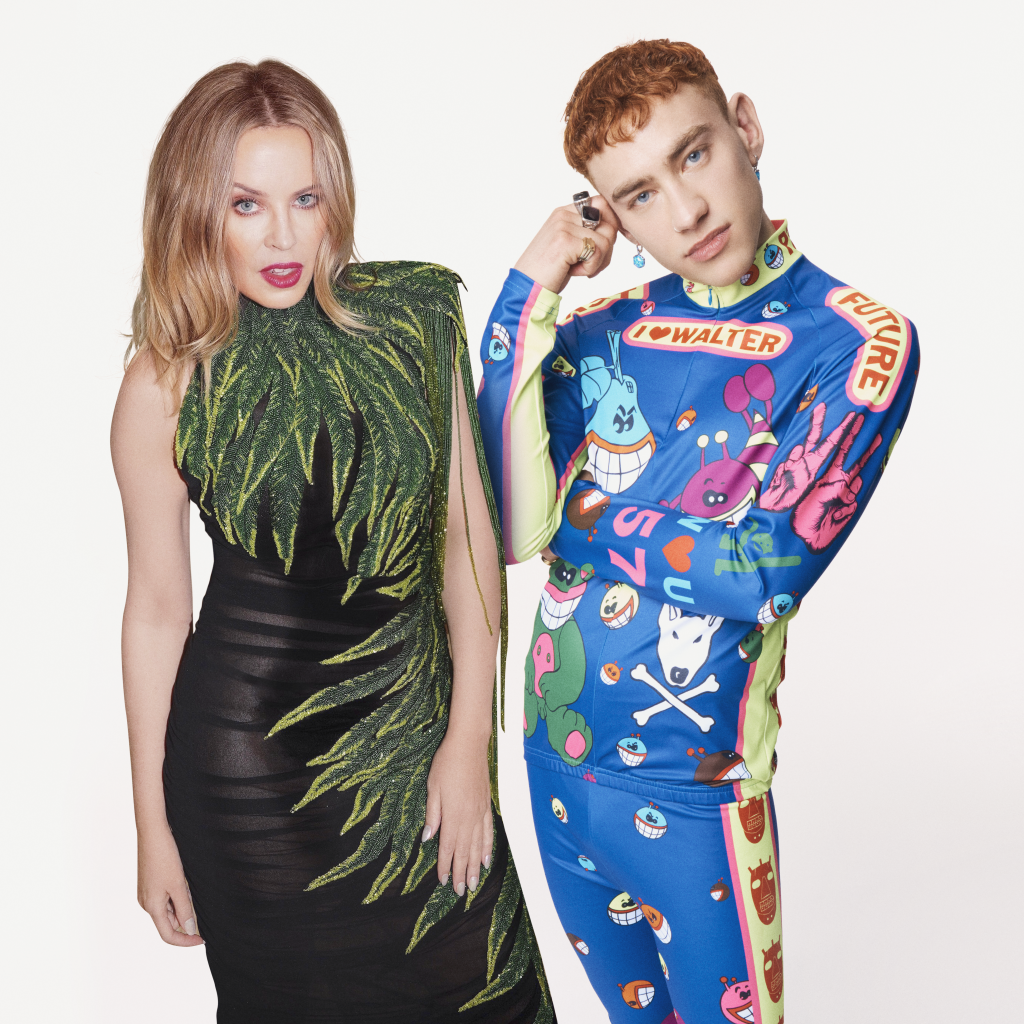 Much more recently – and I’m talking, like, only a few weeks ago now – Olly announced that Starstruck was getting a bit of a revamp. That’s right, in May our very own Kylie Minogue collaborated with Years & Years to bring out Starstruck (with Kylie Minogue), something Olly had been anticipating for… years and years (see what we did there). Olly reflects on the events l e a d i n g up to the collab, saying, “what actually happened first is that I had written a song a year or so ago that I really loved, but I just couldn’t, ever make the verses work. Then Kylie heard it and she was like, ‘oh, I’d love to record this with you – I’m gonna change some of it up, what do you think?’ AndIwaslike,‘ohmygod please, that would make my entire life, you know, writing a song with you, is literally a dream come true’! So that happened, and then I put Starstruck out and I was just like ‘oh my gosh, it would be so perfect if she were on this’, so I just asked if she wanted to jump on it and she said yes! I can’t tell you how much of a wonderful woman she is. I mean, I’m sure people know that because, you know, its Kylie, but she just deserves more and more respect, like, she’s Kylie – she deserves it all.”

His relationship with and adoration of Kylie Minogue goes way back, with Olly explaining that, “I’ve known Kylie for a little while – we supported her way back in 2015. I sung with her at her Christmas show in London in 2016 and we played before her iconic Glastonbury set in 2019. Honestly, I have just always loved her, she’s such an iconic artist. She’s been an inspiration for my music, since, well, forever.”

But the Olly Alexander that we’ve come to know and love hasn’t always been the confident, queer icon that he is today. In fact, Olly only ‘came out’ when he was 19 – first to his close friends, and then to his mum. But it wasn’t that part that he found the hardest.

Olly explains, “Coming out is so different for every queer person, it means something different for every person, and it’s also, like, ongoing, you know – you don’t just come out once, you come out continually, and also, coming out to yourself continually. I came out and I found it really hard to just suddenly be like ‘I’m proud to be gay’, and I think that there can be a lot of pressure on you to suddenly feel a certain way or, you know, like, when you’re figuring out what your identity is, there are a lot of roadblocks along the way until you feel really comfortable with yourself, and that definitely took me a while. I mean, now I’m, very far away from the person that was so ashamed of being gay. Now I feel so far from that shame…but it took a while.”

To all the young (and old) queer people that are facing those exact roadblocks right now, Olly has some advice, “first of all, there are a lot of people out there waiting to support you, like there is an entire community waiting to support you. They’re out there because we know that it can feel like you’re the only person that feels a certain way, and that you can just feel so isolated.

For me, I just really wished that I wasn’t gay, but all that stuff that makes you feel like you’re different, that’s the stuff that makes you special – that’s gonna make you stand out, and it’s gonna become such a beautiful part of your identity and something you get to explore. There is no one big thing though, like, especially when you’re younger, I think it can be really overwhelming, all of these options and all of these possibilities when you’re trying to figure out who you are. It’s tough and it’s challenging, but it does get easier.”

If you’ve gotten this far, we love that for you. But before you go, we’ve got a few jobs for you.

1. If you’re this far in and you’re still unfamiliar with Olly’s work, go hit up Spotify, Apple Music, or (god forbid) YouTube, and familiarise yourself (particularly with Starstruck feat. Kylie obvi).

2. Once you’ve fallen in love, read on to learn about a little bit more about Olly Alexander and his fave things at the moment.

Q: GO-TO COFFEE ORDER?
A: Iced Latte (is any gay reading this surprised??)

Q: FAVE QUEER ARTIST?
A: Julez Lorenzo – an up-and-coming queer British artist that Olly says is one to keep an eye on!

Q: FAVE SONG AT THE MO?
A: Say Yeah by Mnelia….which is very coincidental, considering mine is, and always will be, ‘Yeah!’ by Usher (don’t @ me).

Next What's On | New Range of Vege Burgs by Grill'd 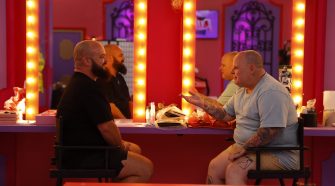