All hail the new Down Under Queens! The cast of the Stan Original series Rupaul’s Drag Race Down Under Season 2 is finally Ru-Vealed. And you know what that means – 10 fabulous new local queens, so let’s meet them!

Selected by Mama Ru herself, sashaying to the main stage to compete to be the next Down Under Drag Race Superstar and forever be part of Drag Race herstory, will be the following 10 fierce new queens. 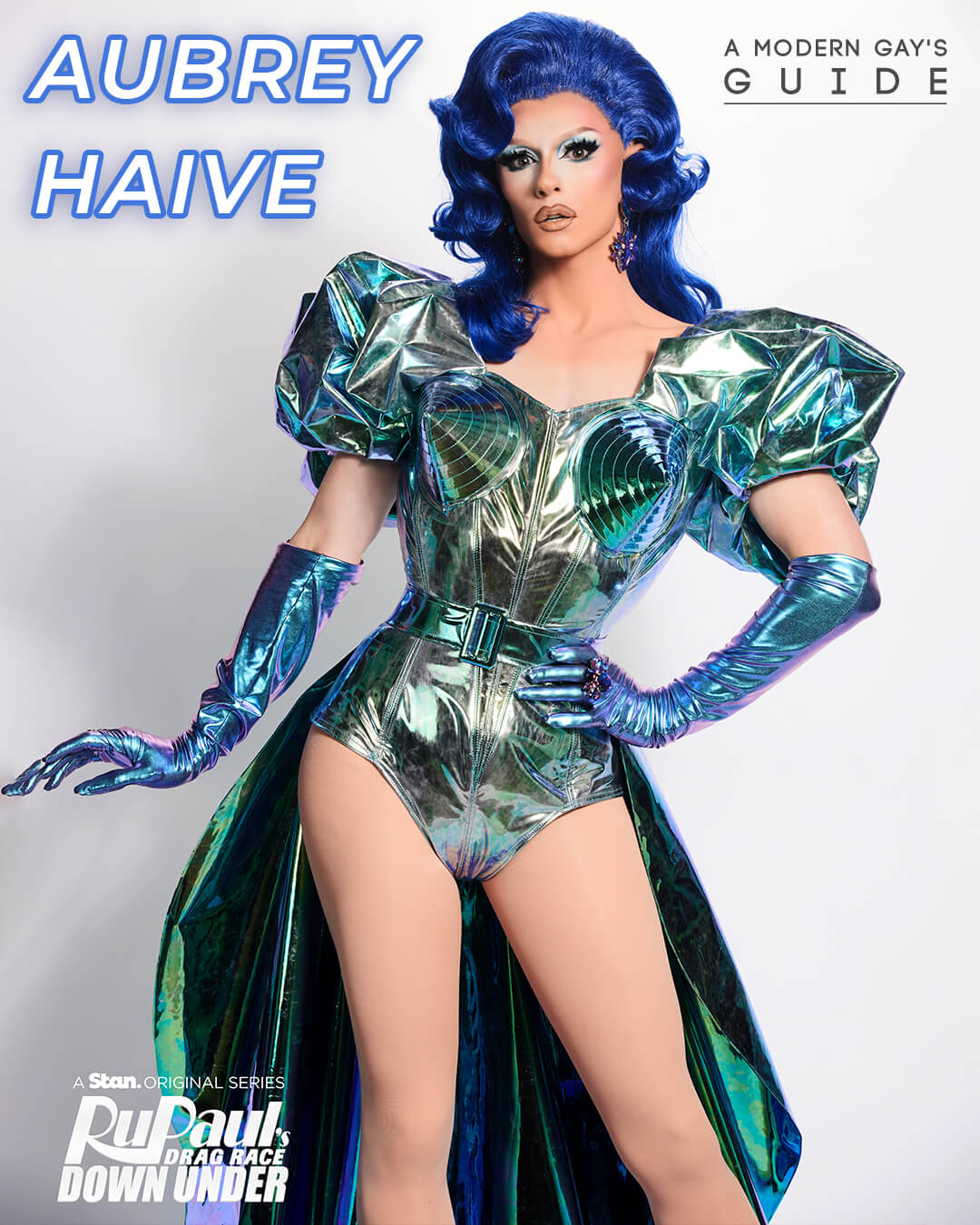 Aubrey Haive (she/her) is no stranger when it comes to being in front of the camera, already a budding actor and musical artiste, this fashion forward queen originally hails from Timaru, New Zealand (now based in Melbourne, VIC).

Aubrey is relatively new to the artform of drag, first dabbling in 2020 – and during the height of the COVID-19 pandemic. After recently moving to Melbourne, Aubrey found herself enduring one of the longest lockdowns in the world, however, she took this as an opportunity to practise her make-up and develop a drag aesthetic with the encouragement of her partner.

It wasn’t long until Aubrey made her debut, and when she did – she made a real impact on the Melbourne drag scene. Aubrey is now booking gigs left, right and centre, and her dream of doing drag as a full-time career is coming to fruition. 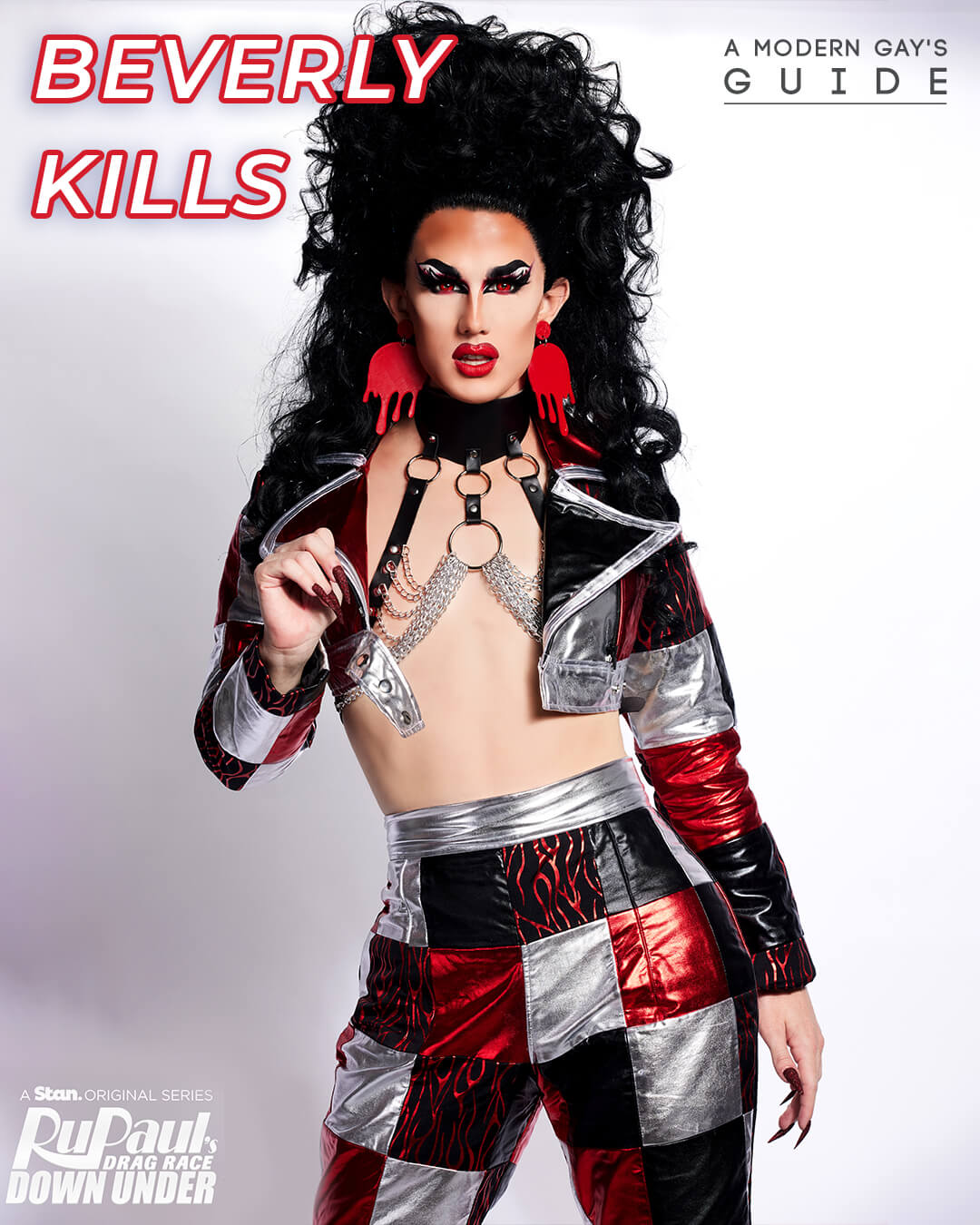 Beverly Kills (she/her) started doing drag within just a few months of turning eighteen. After entering a local drag competition, Beverly managed to take out first prize and within a year she secured a weekly residency at one of Australia’s most renowned nightclubs, Fluffy (Brisbane) – which is no small feat for a new queen on the scene.

Since then, Beverly has established herself as one of Brisbane’s most noted up-and-coming drag performers. Not just a pretty face, Beverly Kills offers something a little extra with her burlesque and sideshow style performances in which you can expect a good whipping, or even some fire breathing! 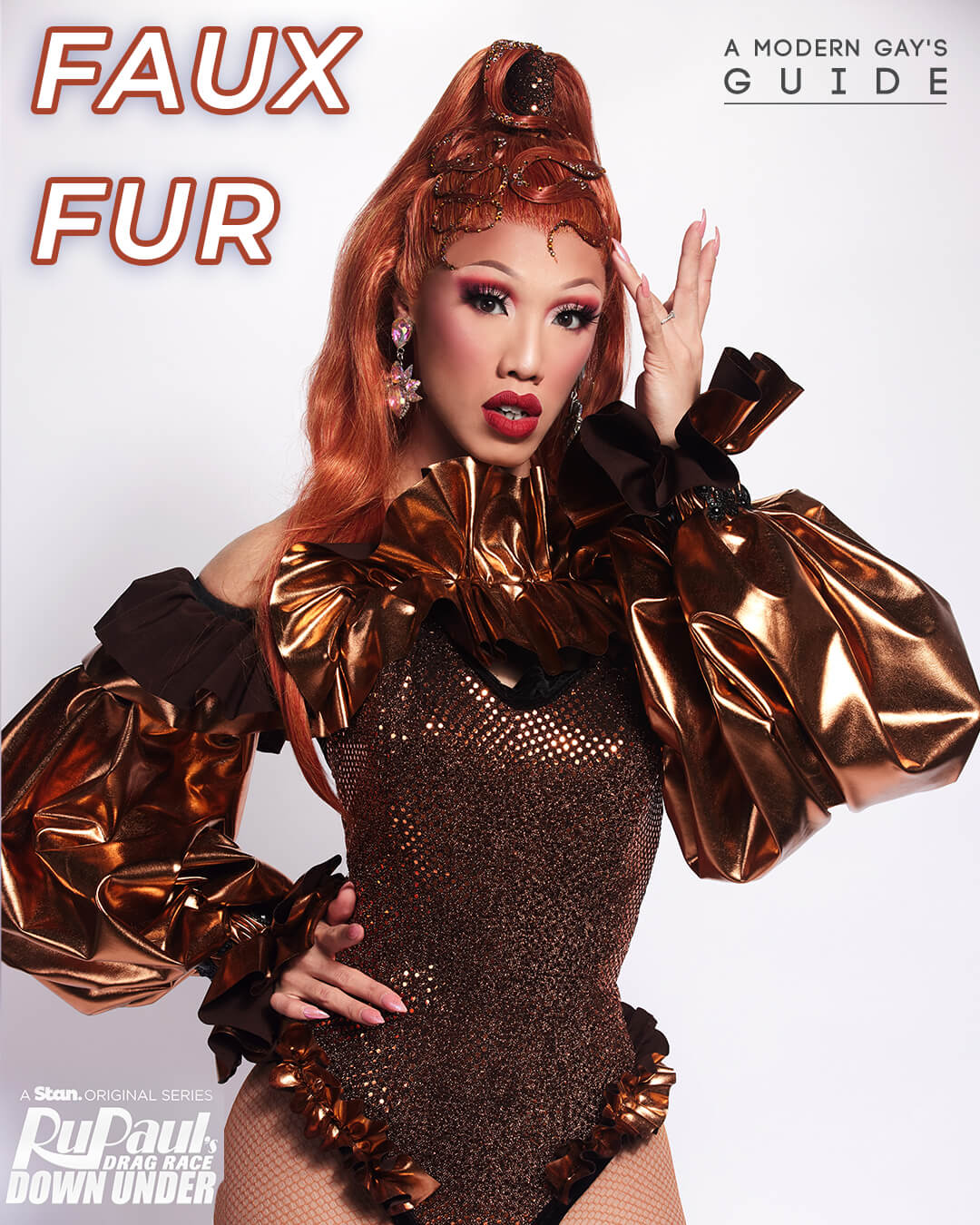 Faux Fur (she/her) has been a regular face, and the loudest voice, among the Sydney Drag scene for the last seven years. Few queens in Sydney can rival the on-stage presence of Faux, known for her high energy performances that leave the crowds screaming for more.

Faux has always been proud of her Asian heritage and noted the lack of Asian Queens in the Sydney scene. In 2020 she started her popular weekly IGTV show ‘Faux Mondays’, a platform where she strives to give not only other queens, but all members of the Queer and POC Queer community, a voice to share their stories in the hope of inspiring others.

Whether hosting an awards night as emcee or simply killing it on stage at the club, Faux is a queen with the biggest of hearts that aims to touch and uplift others in all she does. 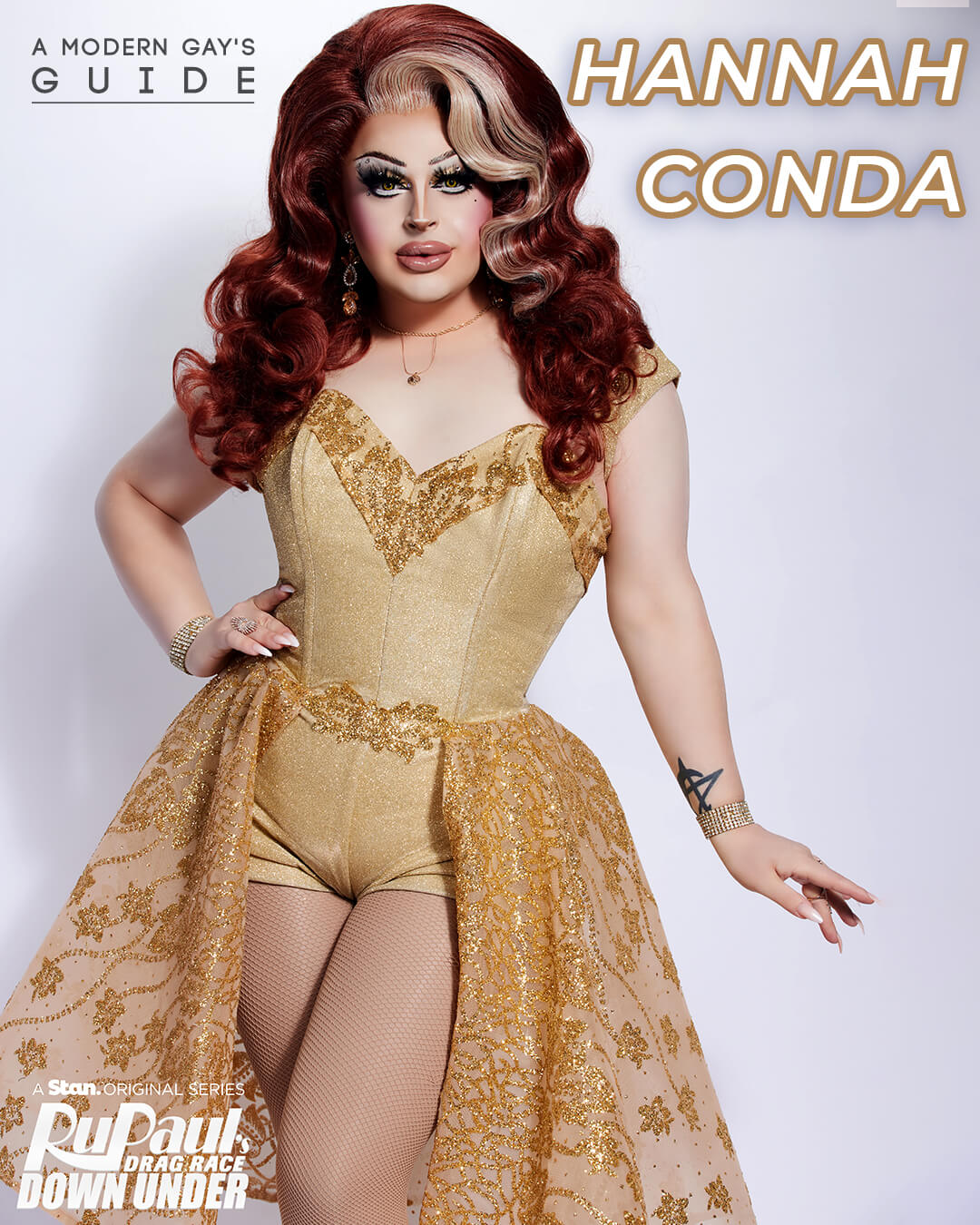 After conquering the Perth drag scene, Hannah Conda (she/her/he/him) took a leap of faith and made her way to Sydney in 2015. Here, she cemented her drag status by being the only queen to have ever won both ‘Rising Star’ and ‘Entertainer of the Year’ at the Drag Industry Variety Awards (DIVAs) all in the same year (2016).

Hannah has been a featured face numerous times at many iconic Sydney Mardi Gras Events, opened for Bianca Del Rio on her Australian tour and even made the journey across the pond to appear at RuPaul’s Drag Con in Los Angeles.

As well as being an award-winning entertainer, Hannah co-founded ‘Drag Storytime’ in 2016, an initiative whereby reading to young children while in drag helps to educate them about inclusion, acceptance and love – as well as allowing them to dream big and use their imaginations.

Hannah has also had a string of silver screen appearances, most notably on an episode of Keeping up with the Kardashians (Season 11) and on Jack Whitehall: Travels With My Father (Series 4). 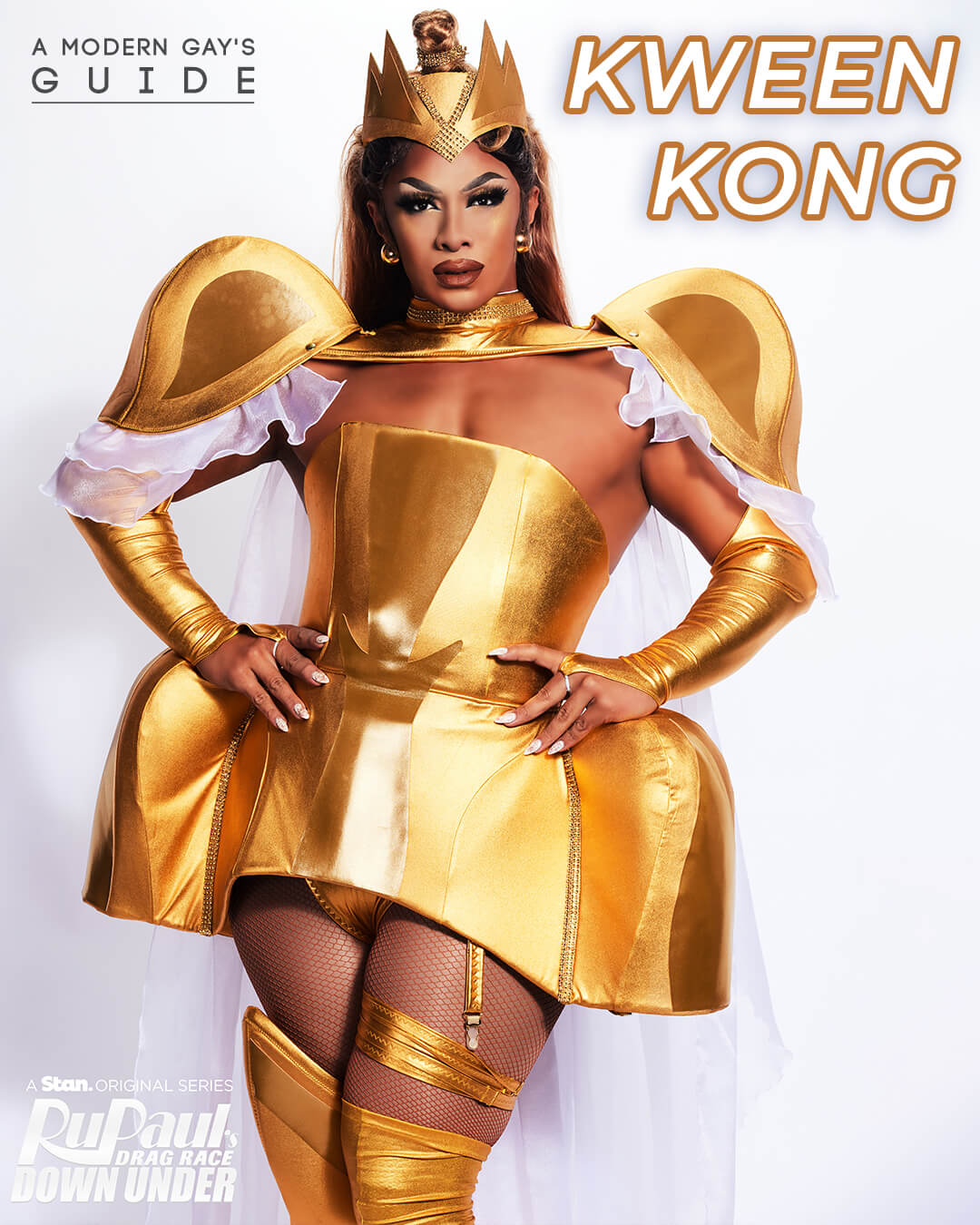 Kween Kong (she/her) is originally from New Zealand, and of Tongan and Samoan heritage, currently residing in Adelaide SA. Known for her powerhouse performances; Kween is a renowned dancer and choreographer within the queer community, frequently touring internationally with the Australian Dance Theatre.

At just sixteen years old she was offered a two-year apprenticeship with Black Grace (one of New Zealand’s leading contemporary dance companies). Kween is also the matriarch of Haus of Kong; a drag collective that aims to change the lives of its young recruits both on and off the stage.

In 2019, Kween won the title of ‘Miss Drag Nation’ Australia, representing Adelaide, SA. Drag Nation is a national competition in which drag talent from each state competes locally before getting the opportunity to represent their state and compete at a national level. 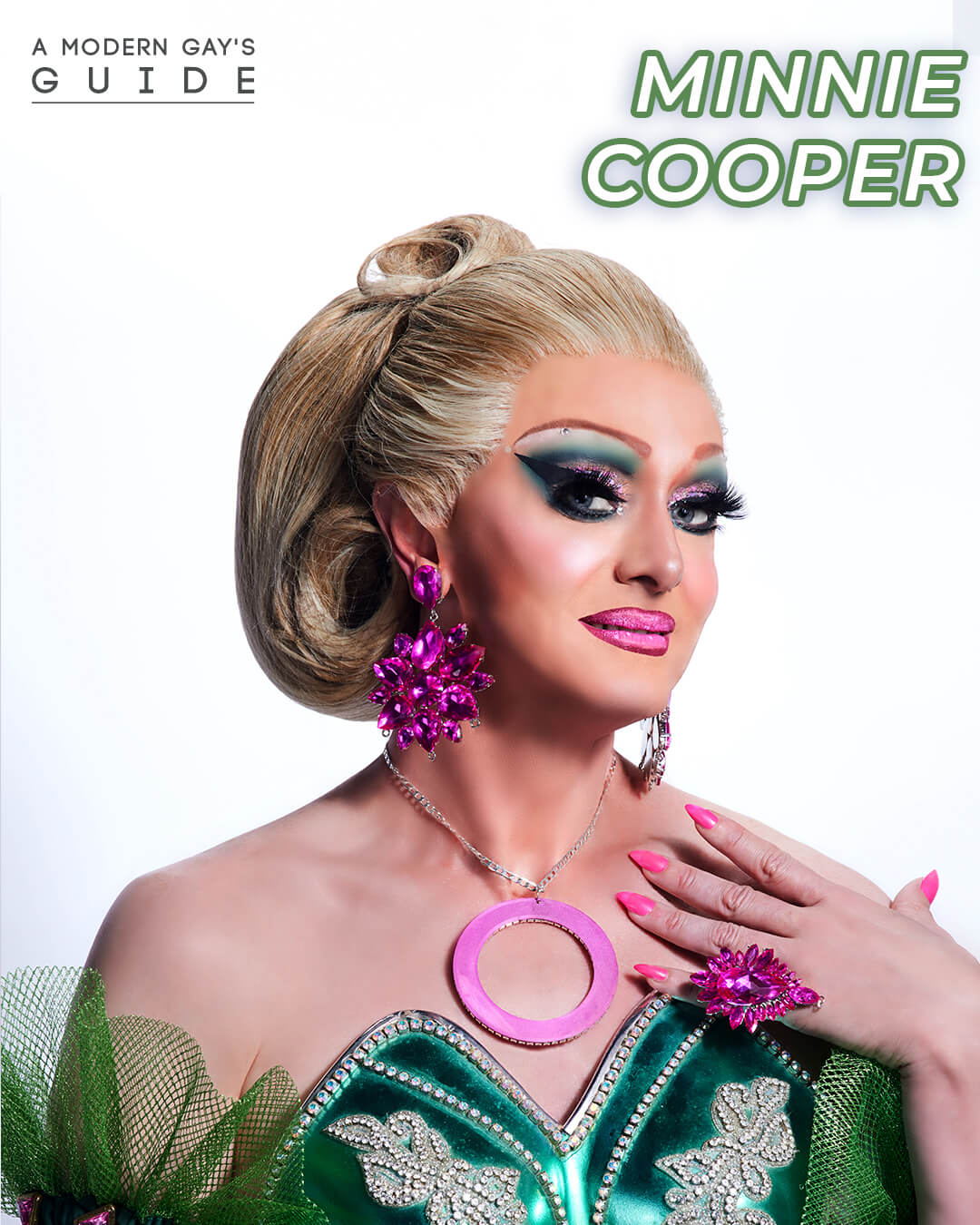 Minnie Cooper (she/her) is considered drag royalty among the Sydney circuit, with a glittering career that spans over twenty years and having entertained audiences from Oxford Street in Sydney to Oxford Circus in London.

In 2016 Minnie was semi-finalist on ‘Australia’s Got Talent’ combining her drag and musical theatre talents. Minnie has performed for gay icons such as Cher at the 2018 Mardi Gras parade, and Kylie Minogue the following year.

Minnie has won more DIVA awards (Drag Industry Variety Awards) than any other drag artist in Australia, including taking the title of ‘Entertainer of the Year’ four times, as well as winning ‘Sydney’s Favourite Drag Queen’ and ‘Choreographer of the Year’, just to name a few.

In 2018, Minnie moved into the world of cabaret with her one woman show ‘From Chorus Boy to Leading Lady’ which was the winner of ‘Best in Cabaret & Musical Theatre Award’ at the Sydney Fringe Festival in 2019. Minnie also appeared in the series Jack Whitehall: Travels with My Father (Series 4). 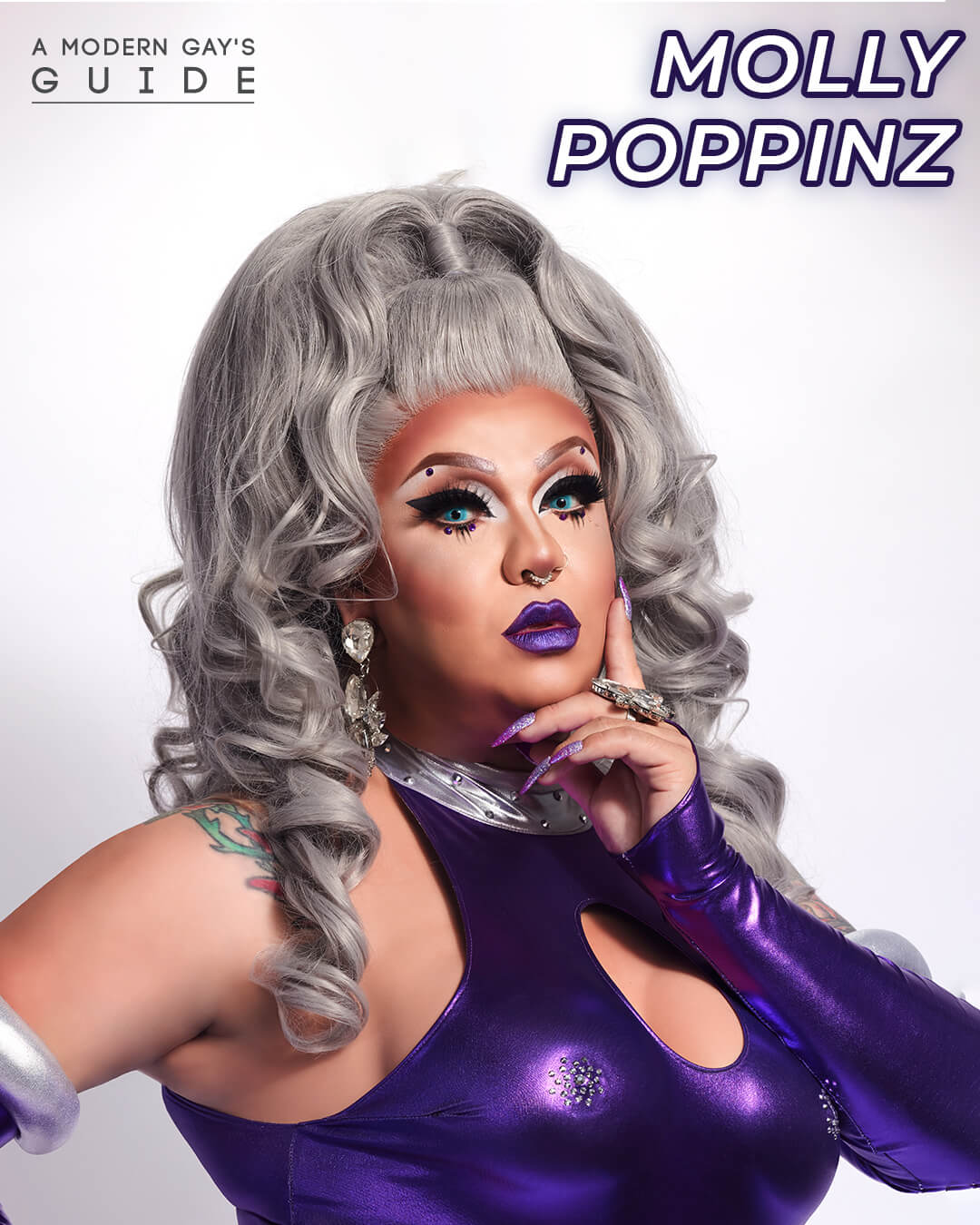 Molly Poppinz (she/her) originally made a name for herself in Vancouver after struggling to find the confidence to do drag in her hometown of Newcastle (NSW). Often referred as ‘The Thunder from Down Under’, Molly was embraced by the queer community in Canada, finally enabling her to find the assurance she needed to perform for the crowds.

During her time away (2016-19), Molly worked as a full time drag performer, known for her fun and campy numbers, but also lending her talents as a Drag DJ, MC/Host, and live rapper. In 2018 Molly was crowned as Vancouver’s most ‘Fierce Queen’, receiving her award from Drag Race Alumni, Aja (Season 9 & All Stars 3).

Arriving back in Australia in 2019, Molly found herself back in her hometown of Newcastle, which was still yet to offer any queer venues or safe spaces. This inspired Molly to cultivate her own shows in hopes of building a thriving drag community in Newcastle. 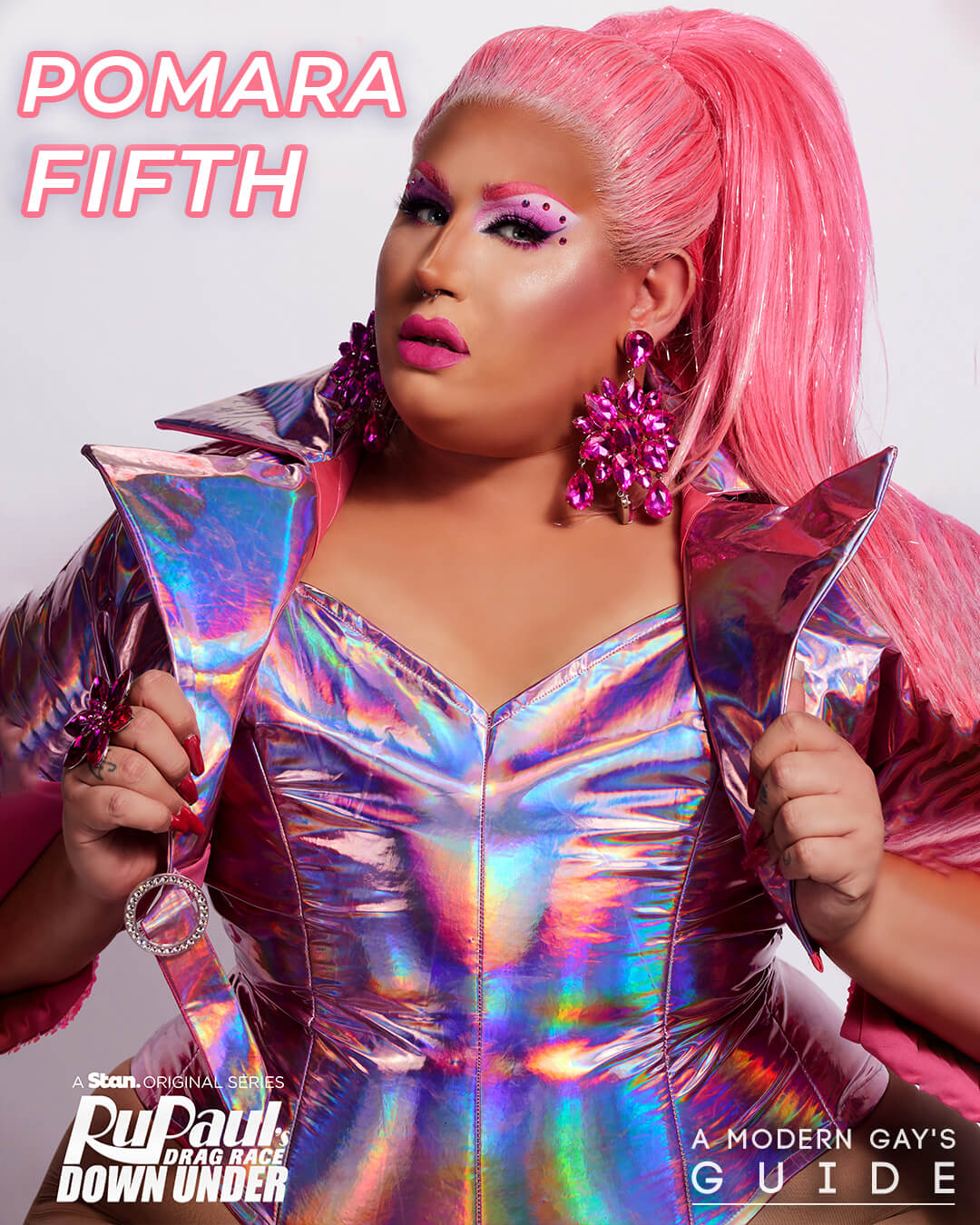 Growing up in the suburbs of Western Sydney, Pomara Fifth (he/she/they) always stayed true to herself and never let the bullies and naysayers keep her down for long. Thankfully her amazing mother and four sisters provided a very open home environment which nurtured her natural exuberance and love for performance.

Pomara represents both First Nation Australian and Māori queens. She has a reputation as being a versatile, multi-talented performer and host, first beginning her drag career in 2014.

In 2018 Pomara won the coveted ‘Rising Star’ award at the DIVA Awards (Drag Industry Variety Awards) and worked at the Sydney Mardi Gras that same year. Pomara has gone on to work for numerous companies and has performed all around NSW, working corporate events and entertaining the masses at drag brunch, bingo… you name it! 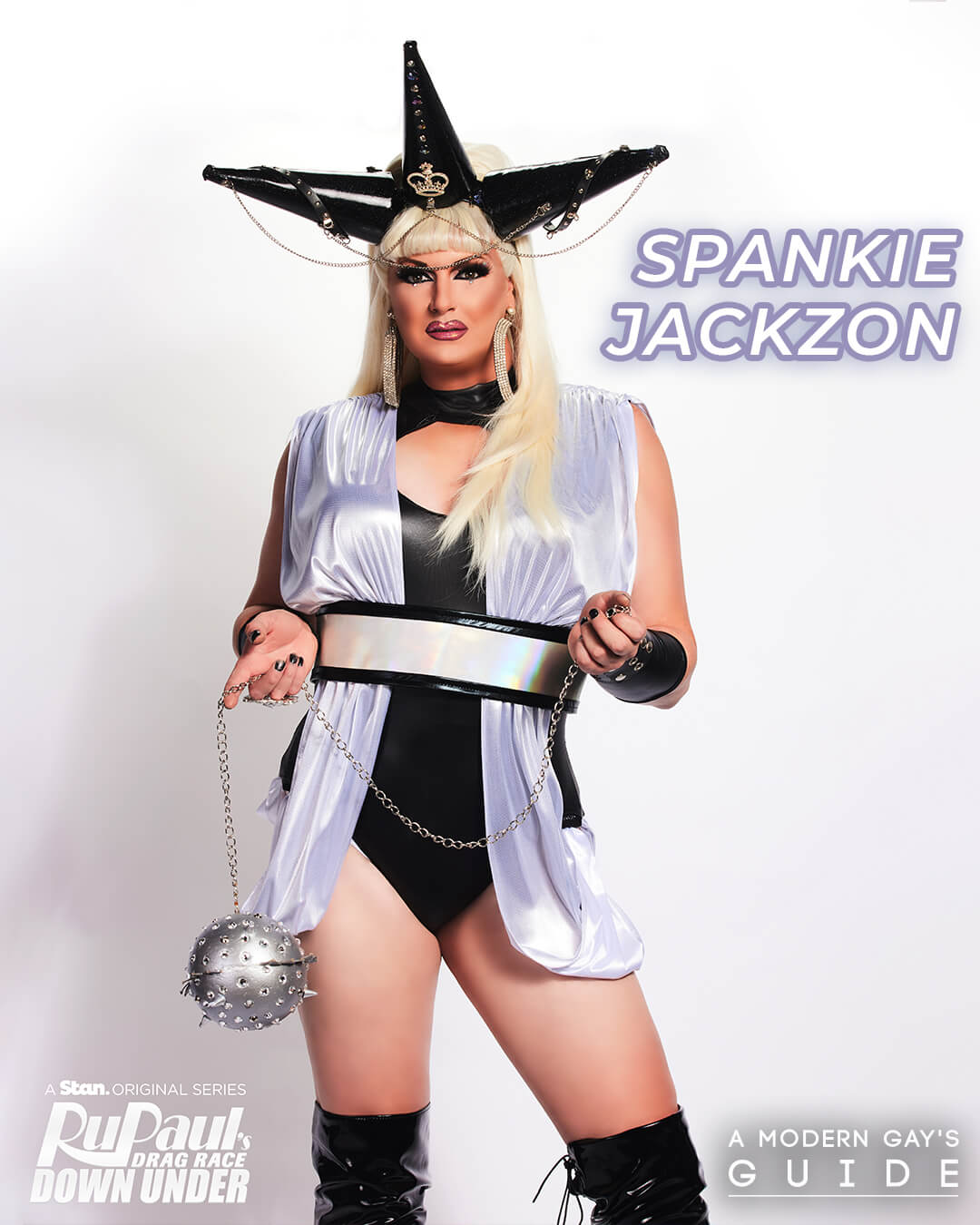 Spankie Jackzon (he/him/she/her) is a New Zealand drag performer best known for competing on original Kiwi series House of Drag (Season 2), where she came in as an intruder in Episode 4 and was eventually crowned as the winner, taking home the 10k cash prize.

With over fifteen years of experience, twelve of which were spent amongst Melbourne’s competitive drag scene, this Palmerston North (NZ) queen admits she isn’t here to play games as she vies to take another crown.

Spankie Jackzon is the official host and roving reporter of The Wellington International Pride Parade, bringing drag to small towns across Aotearoa. With buckets of charisma, a vivacious personality and cheeky sense of humour, Spankie has it all covered! 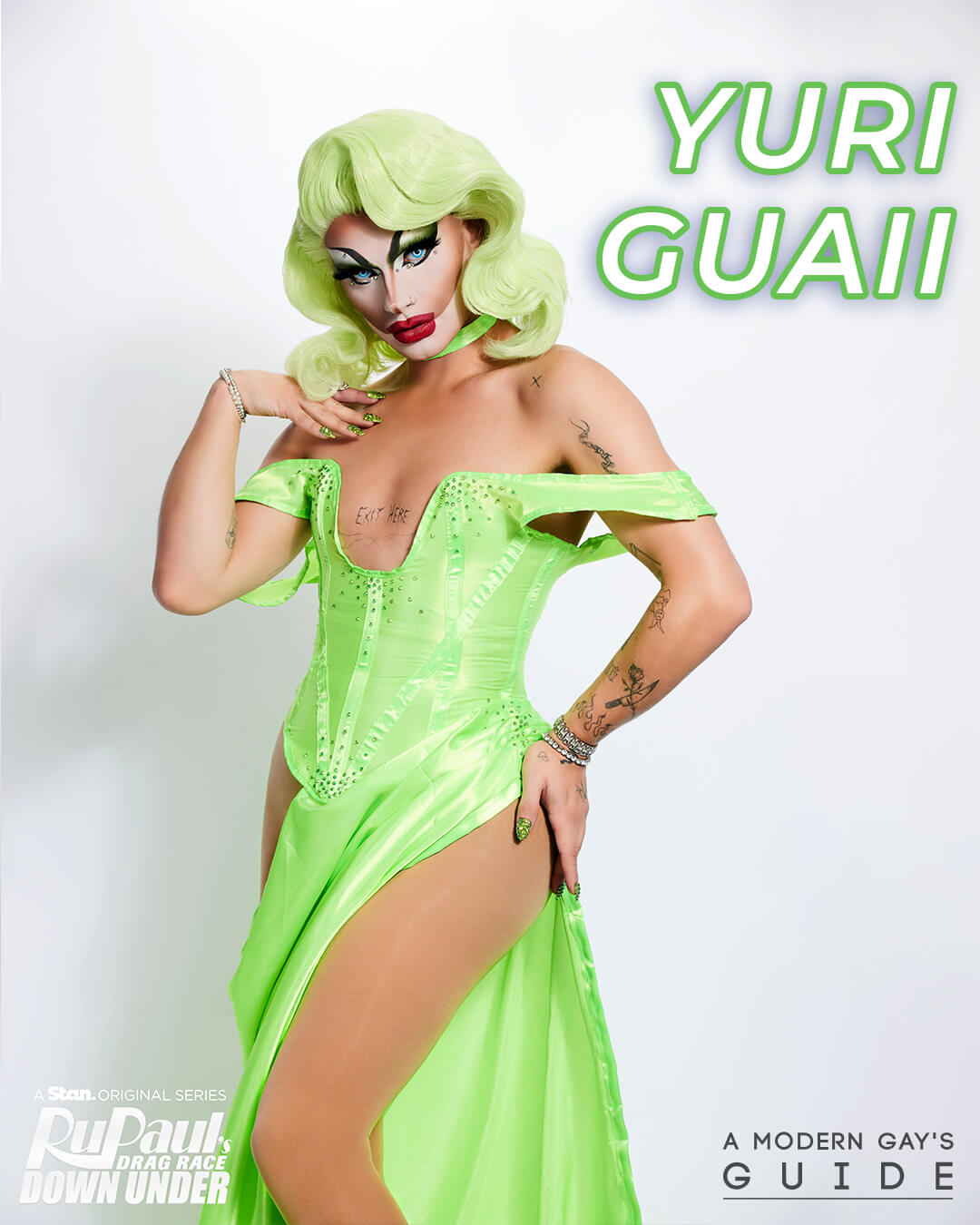 Starting out at the age of eighteen, Yuri Guaii (she/her) has been doing drag for going on eight years, however making her start on the Auckland drag scene was not easy ground to break.

Despite spending six months developing her make-up and sewing skills within the confines of her bedroom, Yuri was known for her spooky aesthetic which only got her booked for gigs taking place on Halloween.

Yuri really had to try hard to get herself out of the “spooky girl” box – and that she did – now living up to the reputation of being one of Auckland’s most talented drag make-up artists, and so it’s no surprise that she finds herself here on the mainstage of RuPaul’s Drag Race to show the world what she’s made of.
Having studied Fashion Design, Yuri’s secret weapon is her sewing skills and she’s known for creating all her own show-stopping drag looks.

The brand new season of the Stan Original Series RuPaul’s Drag Race Down Under will premiere Saturday 30 July, only on Stan.

Next ORACLE: A Mythical Journey Through The Stars | Review

4 Last-minute hacks to add a little extra ‘unff’ to your Mardi Gras Look! 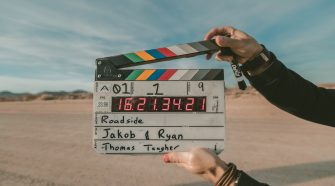