Between releasing her Big Diva Energy EP, dropping music videos, being announced as one of the main artists touring Australia’s very own Summer Camp Festival*, to gearing up to release a Christmas single… and a ‘big’ secret project ready to be dropped in early 2022, she’s single-handedly putting the BIG in Big Freedia.

Big Freedia, the New Orleans native and rap legend, is credited as one of the innovators of bounce music, which is probably why she has been named ‘The Queen of Bounce’. But judging by her resume, she should also be called ‘The Queen Of Collabs’, with names like Kesha, Drake, RuPaul, Jordan Sparks and Boyz II Men (and many more) in her repertoire. The self-described diva has accomplished a lot throughout her career, and she’s showing no signs of slowing down anytime soon.

This September, Big Freedia unveiled her Big Diva Energy EP, which comprised a bounty of booty bouncing bops that meld her booming voice, bass-infused-beats, and braggadocious lyrics. And more recently, she was announced as one of the headlining acts at Summer Camp Festival 2022 (which boats itself as the ‘first southern hemisphere festival with internationals’). Put the two together, and Freedia is sure to set temperatures soaring and, Aussie dance floors ablaze.

The rapstress talks about the inspiration behind the track ‘Big Diva Energy’, explaining, “when I thought of the project, I wanted to encompass what I bring to the world…and that’s my energy. I’m always using my platform as energy for myself, along with representing for all the people that come to my shows and all my fans all around the world. The energy that we transfer to each other back and forth from the stage to the dance floor.

“BDE talks about Big Diva Energy and Big Dick Energy. I wanted to put something out there for the girls, and the boys, to represent us in the right way, and that’s what the Big Diva Energy project was all about and why I’m so excited about it. I just want to keep on bringing great energy to the world, and giving it back to other people that bring great energy to the world – those are the people that I’m down with”.

Along with BDE, the busy and booked rapper also featured on Slayyyters track ‘Stupid Boy’, but she promises that won’t be the last you’ll hear of her in 2021, teasing that she’s dropping her fire single ‘Tis The Season’, a Christmas bop that you can break out your ho-hoho moves and “drop ass to”. Now that’s a Christmas miracle.

Initially embarking on her career 21 years ago, Freedia admits that she did face a lot of trials and tribulations being black and gay in an industry like hip-hop, which was (and still is) predominantly filled with macho men, riddled with toxic masculinity, and at times very homophobic, saying, “I faced adversity just like everybody else,” though professes, “I had to deal with some bullying situations, but through it all, I never gave up, I stayed focused, I worked really hard and was determined.”

Asserting that she had to, “fight for my position and what I stood for”.

Through all that, Freedia’s never taken her eyes off the prize.

“The biggest thing was making the music, bringing joy to people in clubs and in homes all around the world, and focusing on enjoying the music”.

Queer hip hop artists are still few and far between in 2021, but thanks to pioneers like Big Freedia who were brazen enough to be themselves in an industry that wasn’t made for them, others can now follow in their footsteps, like ‘Old Town Road’ singer Lil Nas X, who’s skyrocketed to number one on multiple occasions, and viral sensation Saucy Santana who’s slaying his way to the top, both of which Freedia says that she’d love to work with.

“It’s an amazing feeling to know that all of the hard work that I have put in, has been able to open doors for other new artists so that they are able to get the recognition and the platform that they deserve. It wasn’t as easy for me when I first started, and now that the world is starting to change in certain areas, we are very grateful to be able to step a little bit further into the mainstream and to represent our community.”

The gender-bending bar slinger, really does embrace everything that life encompasses, from its highest peaks, to its grittiest valleys, and all the moments in between. In her new memoir, a book about, “growing up as a choir boy from New Orleans who survived poverty, drugs, and bullying to become a world-famous musical performer”, she divulges all.

In the memoir, Freedia has some words of advice for kids out there going through the same things, “…remember to love yourself. First and foremost, you must accept yourself, before you can go out and expect the world to love you”.

Delving deeper, “you also have to find a great support system that supports you and everything that you’re doing. It may be five people, it may be ten, i t may even be one. Find the people that support you and have your back, no matter what and, most importantly, take your time growing up. Don’t rush into things, you can always wait until you’re older for just about anything. Just take it one step at a time. The most important thing, is think before you react to anything”.

As for what’s next for Big Freedia…she continues to prove that the grind doesn’t stop, teasing that she’ll be bringing out new music, saying, “I’m already working on my newest project that will come after the Christmas single. So, it’ll be sometime in 2022.”

Along with her musical endeavours, she’ll be launching a cookbook, restaurant and “Hotel Freedia”. Yes, you heard that right, a hotel! So, if you’ve ever wanted to say that you’ve been inside of Big Freedia, you better make a reservation STAT.

To her Australian fans, she says, “I’m ready for Australia. Get those asses down under to get ready to get up and start moving and shaking and bouncing and twerking. So, baby get ready. Have your booty shorts on because we comin’ to cut up”.

*Since this article was written, Summer Camp Festival has sadly been postponed. The organisers say, however, that when Summer Camp is rebirthed, it’ll be camper than ever, so stay tuned! 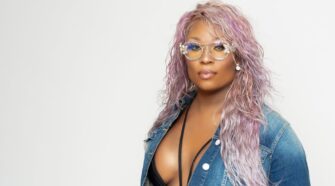