Meet Miss Victoria Anthony – a DJ who has quickly risen through the ranks of Sydney’s nightlife scene, and someone to keep a very keen eye on.

Victoria (she/her) can often be found setting dance floors ablaze while seamlessly melding her club mixes with the latest pop and throwback classics to create an atmosphere that can only be described as euphoric.

From a young age, Victoria had always been drawn to music like a moth to a flame.

Noticing music sparked something inside of her, she pursued her studies and fanned the flames that had ignited within her. As a student she received a grant that enabled her to buy some of her first DJ sets, spurring her on, and graduated with a Bachelor of Music (Honours) majoring in Musicology back in 2011.

During university, the youngster fell head-over-heels with Sydney nightlife, where she partied on Oxford Street and met drag queens who she initially wanted to be, “and it wasn’t until a bit later, I realised that I actually wanted to be a trans woman”.

During this time she continued to better herself by putting in the hours, practicing her craft, and learning from some of the best Sydney has to offer.

With a fire burning deep in her stomach and the determination to succeed in her eyes, she moved to the melting pot that is New York City, and quickly discovered a treasure-trove of unique music styles that she dove headfirst into.

Fully immersing herself into the New York City music scene, she incorporated elements of the new styles she’d been exposed to and began to garner recognition that helped propel her career.

Being the proud trans woman that she is, Victoria talks about what that means to her, saying, “it means to be visible, so I really love to be out and proud in the community,” divulging, “I think when we’re visible, other people get to see who we are…and maybe become inspired, or someone to talk to for someone who may be going through the same journey.”

During her time in NYC, she was given the opportunity to work at world renowned music festivals, and proved the age old saying ‘with great risk, comes great reward’.

Upon returning to home, Victoria has continued to stay booked and busy, and is known by many to be one of Sydney’s top DJs.

For the kids who might are questioning their gender, she says, “It’s okay to be who you are…there are going to be people who support you.”

And to any onlookers, she says, “be supportive and embrace them”.

All in all, she, like many of us, hopes to one day live in a world where being trans is celebrated.

Previous WHAT TO WATCH | NEW LGBTIQ+ AUSSIE DRAMA 'MORE THAN THIS'

Next Let's U-Haul the U-Haul Stereotype 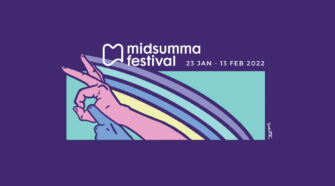