Timothy Springs (known by some by the name ‘Hollywould’) is heading to the 2022 Sydney Gay and Lesbian Mardi Gras. The American-born singer who now resides in Sydney is ready to take centre stage at the SCG as over 60,000 of us watch the parade from around the world. In anticipation we’ll watch as both Timothy and Hollywould fulfil a lifelong dream in what promises to be a night to remember.

Classically trained as a singer, Timothy (@timothy_springs) has toured the world performing in major stage productions like Kinky Boots, slaying the floors of Sydney nightclubs as his drag diva persona ‘Hollywould’, and performing in arenas at events like the 2015 Boxing Day Test Match where he sung the Australian National Anthem

It’s safe to say that Timothy is no novice to a big crowd. He does admit, however, that performing at pride is different, “this is like the Gay Super Bowl”. Diving deeper, he teases that he’ll, “be singing three songs with costumes and back up dancers”, all of which I’m sure will put the crowd on a Hollywould high. Beaming with anticipation, and excitement in his voice, Timothy promises a, “full production” with “high energy”. He does admit, though, that there won’t be as much dancing as is considered the norm for Timothy, explaining, “it’s a beautiful story that we’re telling. It’s a little different than just singing three numbers. There’s a great story that we have in between the songs that I think everyone is going to love”.

Growing up, the singer faced struggles navigating all the intersections of himself, being not only a person of colour, but a gay one at that. He “didn’t have much representation at all”, he says, continuing that his formative years were extremely hard for him, and he often felt like he was struggling to find himself.

Eventually, Timothy made his way around the world, landing in Australia for what he initially thought would be a one-year stint.

Eight years later, he reminisces, “now looking back, I really love the person that I have become… and I feel like when I moved to Australia, I really found Timothy.” He pays credit to the people around him who helped him become as confident as he is.

Speaking more on representation and why that matters, Timothy says, “as a gay person and a person of colour, I feel like it’s ten times harder for us, especially, not having that representation. So, I’m just I’m so grateful to have this opportunity and for people to see that on the screen and know that it’s okay… and you know, they can do it too”, adding, “there aren’t many of us here in Australia who get this opportunity. I do not take it lightly”.

He empathises with all the little POC boys out there who see themselves in him, saying, “be yourself. Honestly, the world is changing and there’s so much that you can offer. Even if you do have a hard time there are other people who will love you. That’s just one needle in the haystack…Life can definitely be hard. But if you push through, you’ll definitely get through it.”

To catch Timothy and Hollywould living their best lives, make sure to head down to the SCG on March 5 for the Sydney Gay and Lesbian Mardi Gras Parade.

Next WHAT TO WATCH | NEW LGBTIQ+ AUSSIE DRAMA 'MORE THAN THIS' 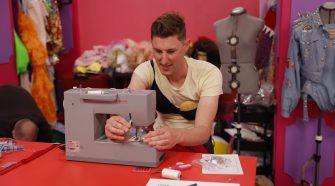 Interview With Down Under’s Anita Wigl’it