Looking for Sydney’s best gay club, or just trying to figure out where to head this weekend? Well look no further, because A Modern Gay’s Guide have you covered with 6 of Sydney’s best gay clubs! With a multitude of LGBTI+ venues around Sydney, we’ve pulled together a list of six of our absolute fave queer nightlife spots! 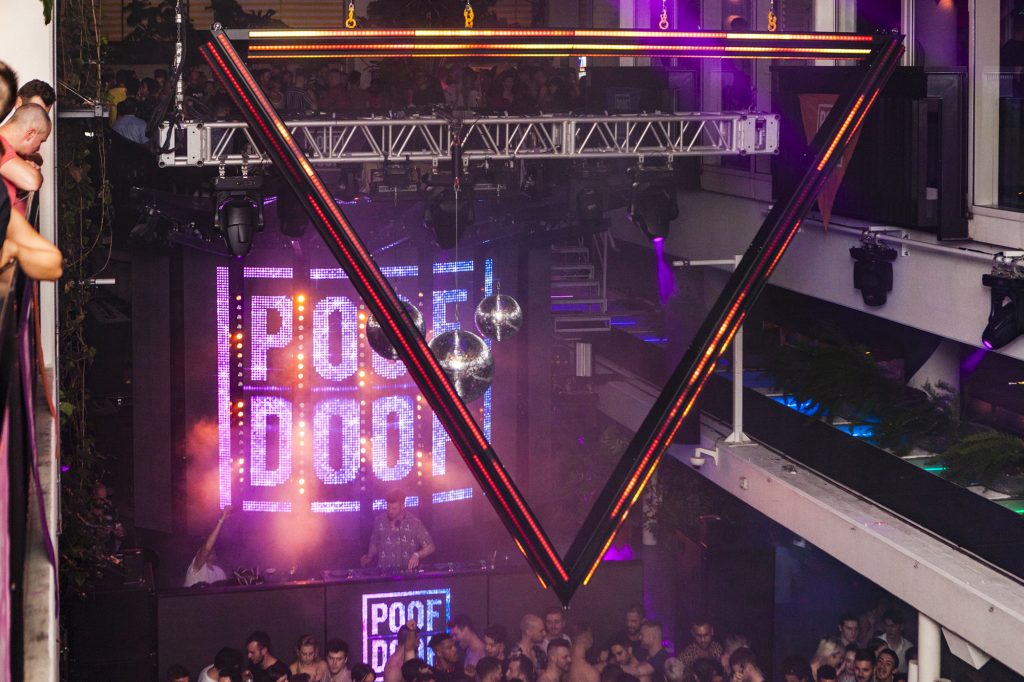 The Gist: Okay, we’re not going to lie, we’re high-key obsessed with this one, which is why it’s landed itself the top spot on our list of Sydney’s best gay clubs. Poof Doof Sydney is the absolute new kid on the block in the gay Sydney nightlife scene, but it’s already made an incredible name for itself. Already well known as a gay Melbourne institution, the brand only made its way to Sydney in late November 2019…which is roughly the last time any Sydney gay spent a Saturday night anywhere else. The club takes over the entirety of Merivale’s ‘Ivy’ nightclub every Saturday night – a huge venue for a huge mood.

The crowd is always electric and a great mix – mostly gay guys, a decent make-up of gay gals and of course the couple of token tag-along straight pals (the real MVP’s in our eyes…#ThanksForTaggingAlongPals). Both an upstairs and a downstairs d-floor (both boasting absolute bangers), drag shows and dance performances aplenty, an in-venue open-aired smokers area and plenty of space to chill out for a red hot minute between ‘doof-ing’ (is that a word ¯\_(ツ)_/¯), really means this club has it all. See ya’ there sis x

The Whereabouts: You’ll find Poof Doof inside Merivale’s ‘Ivy’ nightclub, tucked away on Ash St in the heart of Sydney’s CBD.

Best Time To Go: Well, in true Gay’s Guide style, we’ve saved the best for last. Pre-purchase your ticket to Sydney’s Poof Doof and you’ll earn yourself a free hour of drinks from 10.30-11.30…there’s a reason this one’s our fave!

The Cover Charge: Less cover charge, and more tickets (which can usually still be bought on the door), though you’ll usually be looking at somewhere between $25-$35…again, did we mention the Rainbow Hour free drinks though?? 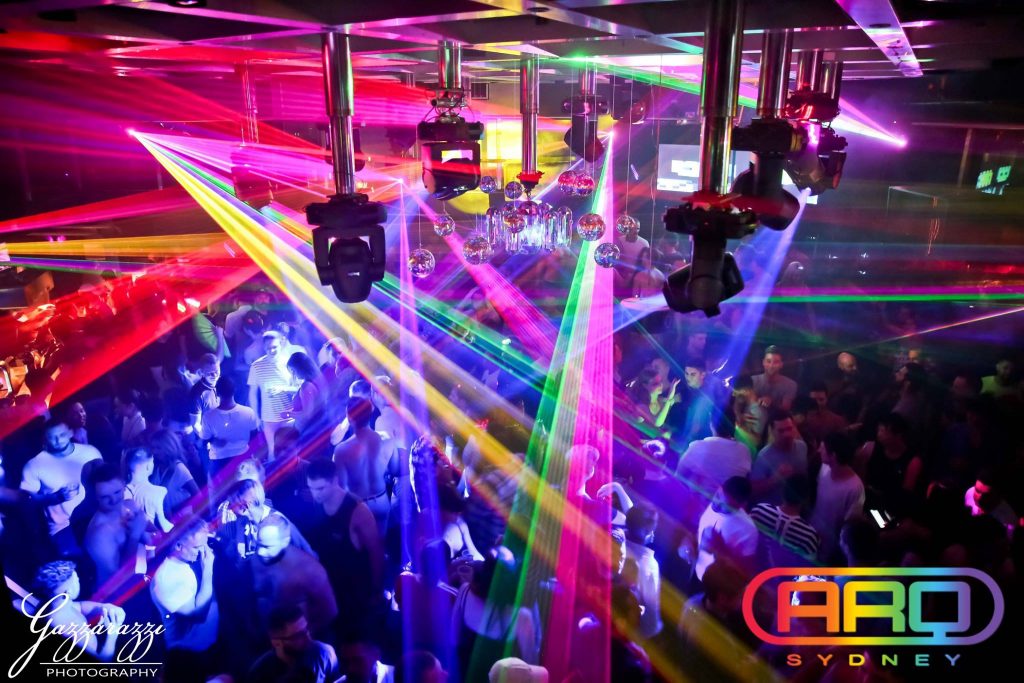 The Gist: If you’re gay, and you’re looking for a right rager, you’re heading to ARQ. Think laser lights, world-class drag shows and think many, we repeat, many, shirtless men. ARQ is known all over the world for its penetrating sound, it’s euphoric lighting displays, their resident performers and world renowned guests, and a mezzanine level that allows people to rise above the magic and take it in from above.

The Whereabouts: Located right at the top of the Oxford Street precinct, opposite Taylor Square on Finders street.

Best Time To Go: Saturday nights are definitely ARQ’s biggest night, but if you’re feeling thrifty, you’ll want to head on in on a Friday night to save yourself from the Saturday night cover charge. The venue gets in full swing any time from 11pm.

The Cover Charge: On a Friday night you’ll get in free, however on a Saturday night, you’ll be hit with a $25 cover charge. 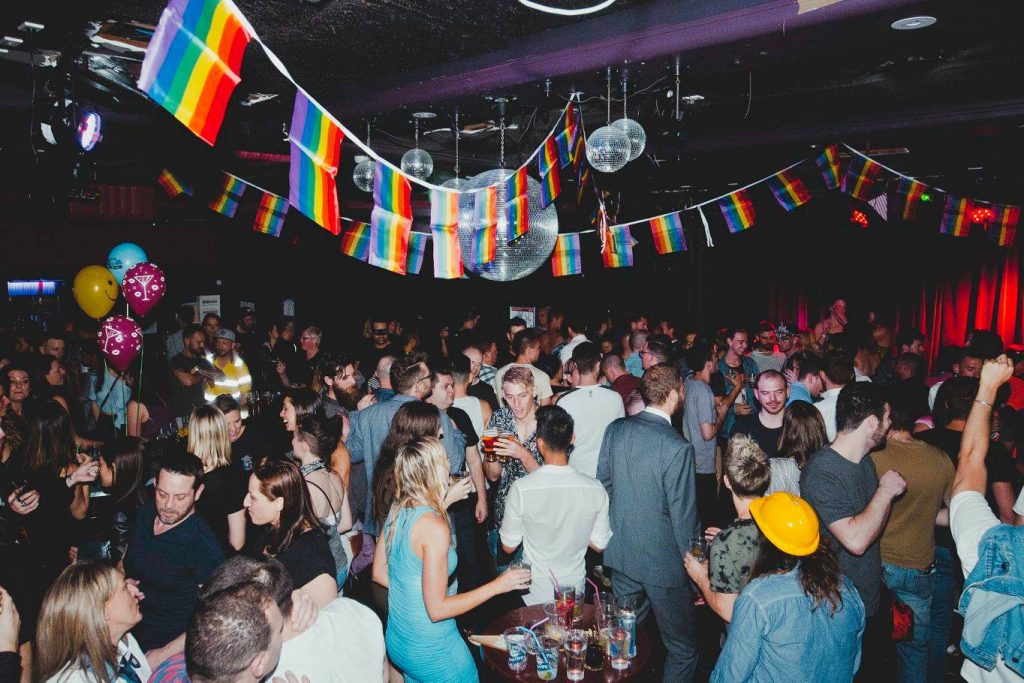 The Gist: First and foremost, we absolutely love. This is the gay bar/club to suit literally any gay. Whether you’re a gay boy, gay gal, don’t identify, or somewhere in the middle, you’ll have a ball. If you’re looking to party, the Imperial is a happening nightclub playing all of the best gay beats – think top 40 pop hits, mixed with gay throw back classics. It’s a happening vibe, with none of the attitude or intimidation that you may sometimes feel at other, more intense, gay clubs.

Along with being a happening nightclub on both Friday and Saturday nights, the venue also doubles (or really triples) as a casual afternoon bar, a rooftop bar/pizzeria and a drag & dine restaurant, all operating seven days a week.

The Location: Honey, you’re headed west with this one…well inner-west that is. The Imperial is located in Erskineville, just down the road from Erskineville train station (if you’re not looking to drive).

Best Time To Go: Depending on your vibe, you could rock up at around 10.30pm each Friday and Saturday night, ready to absolutely tear up the d-floor and party the night away, or if you’re looking for a more casual dining affair or afternoon bevy situation, you can literally go at anytime. It’s always a big mood.

The Cover Charge: Entry into both the main bar and rooftop bar/pizzeria is always free (#yahss), with the basement usually hosting an event with a $10-20 cover charge on Fridays and Saturdays. Check their website here for more info. 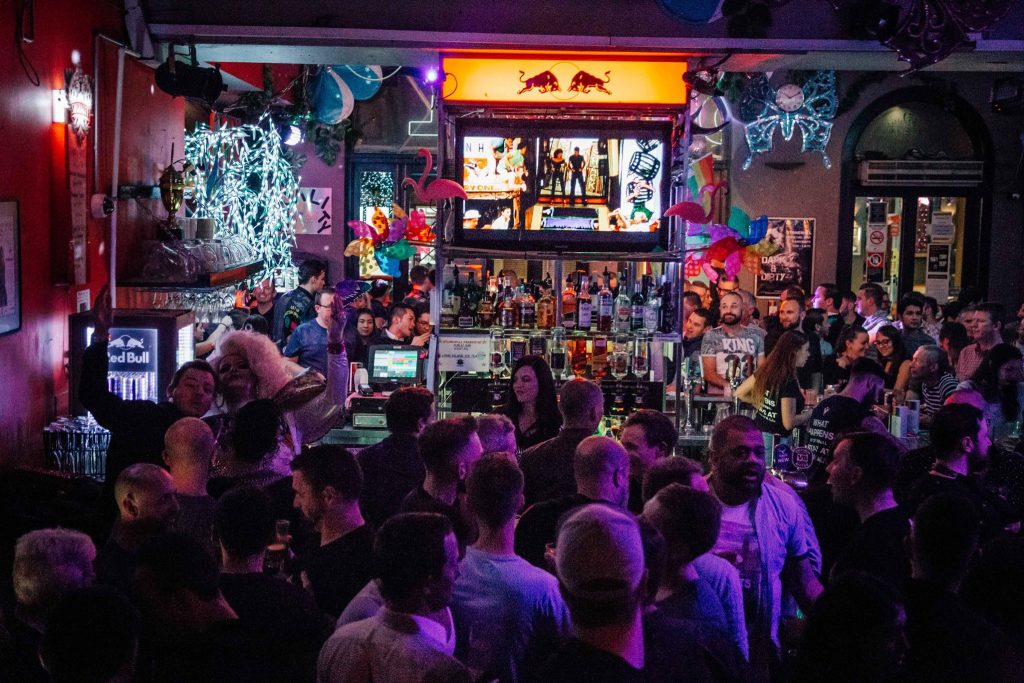 The Gist: Stonewall is an all-round good time. We’re talking three levels of gay clubbing action, each with a super different party feel. Downstairs you’ll be singing along to all of your favourite gay throwback tacks, whilst on the middle level, you’ll be dancing in a cage belting out the best of top 40 pop. If you’re looking for a little more space to show off those fab d-floor moves, you can head upstairs, where it’s a little more spacious, boasting a huge pedestal fan and blaring the best house music Oxford Street has to offer.

The Whereabouts: You’ll find this one at the top end of the Oxford Street precinct…right next to Five Star Kebabs, where you will 100% end up circa 3am.

Best Time To Go: The team behind Stonewall are a bunch of busy bees, with events on each and every night. If you’re coming to party, you’ll want to go on either a Friday or a Saturday night, with all three levels open, and the club absolutely vibing.

The Cover Charge: You’ll be doing boogie on a budget with this one, as there’s no cover charge whatsoever #YeahBoi. 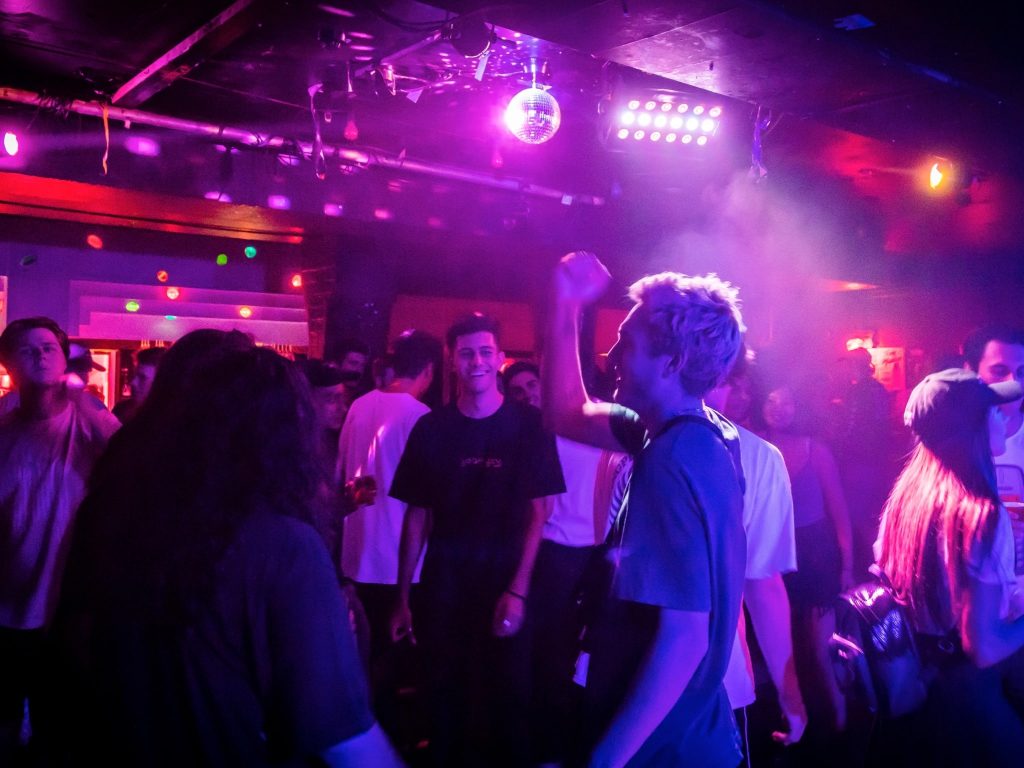 The Gist: Palms on Oxford is an absolute character. You’ll line up on Oxford Street for usually around 10-15 minutes on a Friday or Saturday night, then once ID’d, you’ll head down stairs to what looks (and to an extent feels) like an underground/garage house party circa 2006. It’s fairy lights, a wooden dance floor and about a thousand flashing bright coloured lights shining from who knows where. The music is old-school through & through – think 80’s, 90’s and early 2000’s. You’ll boogie to the likes of Kylie and ABBA for hours…but be warned, you will get your sweat on…Palms is straight up hot. The venue is air-conditioned, though you’ll definitely think otherwise after being inside for anymore than 30-40 minutes. Regardless, it’s always a good night out.

Pro Tip: Lord forbid you wear open toe shoes here, because honey, you will not be coming in. Palms on Oxford have a very strict ‘closed-in shoes only’ rule. If you get caught out on the night, you can chuck those open toe shoes into a bag, and head across the road to the convenience store and snag yourself some closed in flats for $30. They’re hideous, but they’ll get you through the door.

The Whereabouts: You’ll find Palms on Oxford tucked away, right next to ‘Big Poppa’s’ and across the road from Stonewall, at the top end of oxford street.

The Cover Charge: You’ll go cover charge free at Palms on Oxford, though be warned, the bar doesn’t take card…so make sure you bring that cash money! 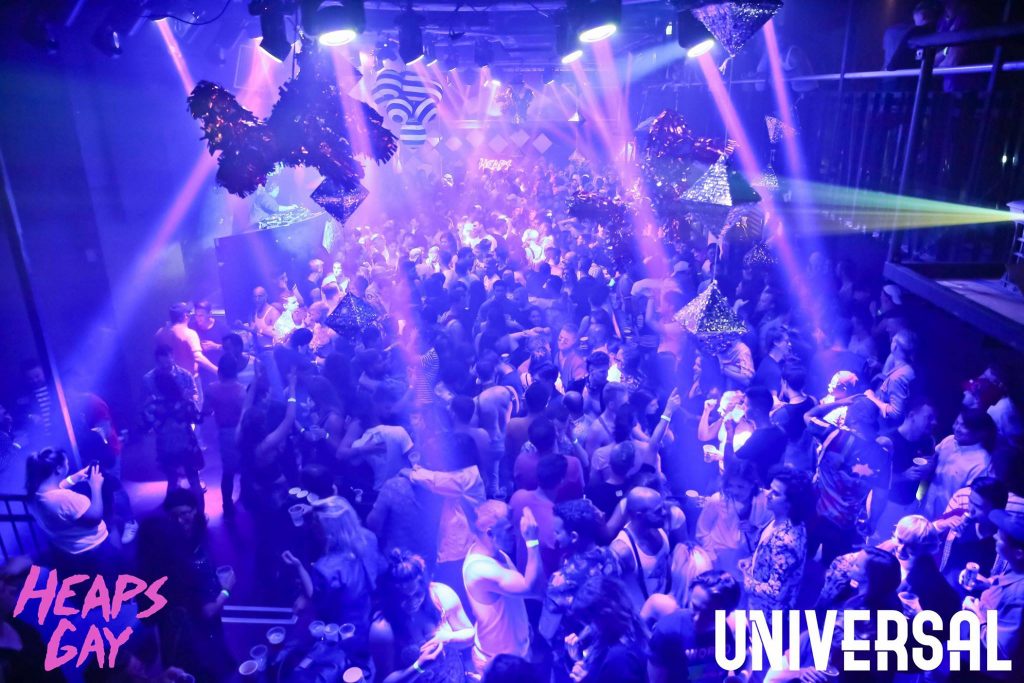 The Gist: Universal is seriously the bomb.com. This two level venue is an optical illusion to say the least. Walking in you’ll come through the doors into a reasonably sized ground level bar/club, where you could easily spend the entire night. You’ll then head on upstairs and your jaw will drop, as you walk in to a huge, we repeat, huge, upstairs nightclub. Picture killer beats, laser lights, a truck load of both guys & gals, and of course a selection of those shirtless boys (…would it even be a gay club if there weren’t??).

The venue is almost always hosting an amazing event, and definitely worth a visit. For those of you seasoned Oxford Street goers, you may remember Sydney’s Midnight Shift nightclub, which is what the venue used to home, before it was given both a face lift and a name change in September 2018.

The Whereabouts: You’ll find Universal smack-bang in the middle of the Oxford Street precinct, just a five minute walk from Museum station.

Best Time To Go: Before you go, you’ll want to check out what’s on and when, but regardless you’ll always have a good time on a Saturday night (just make sure it’s not a ticked event before you go). For a full events calendar, please see here.

The Cover Charge: The cover charge for this one is as unpredictable as our office Wi-Fi. Depending on the night, and the event you’ll be looking at different charges (but sometimes free), so be sure to check here to see what’s on.

Next Sad Reacts Only: Queer Institution SlyFox To Permanently Close 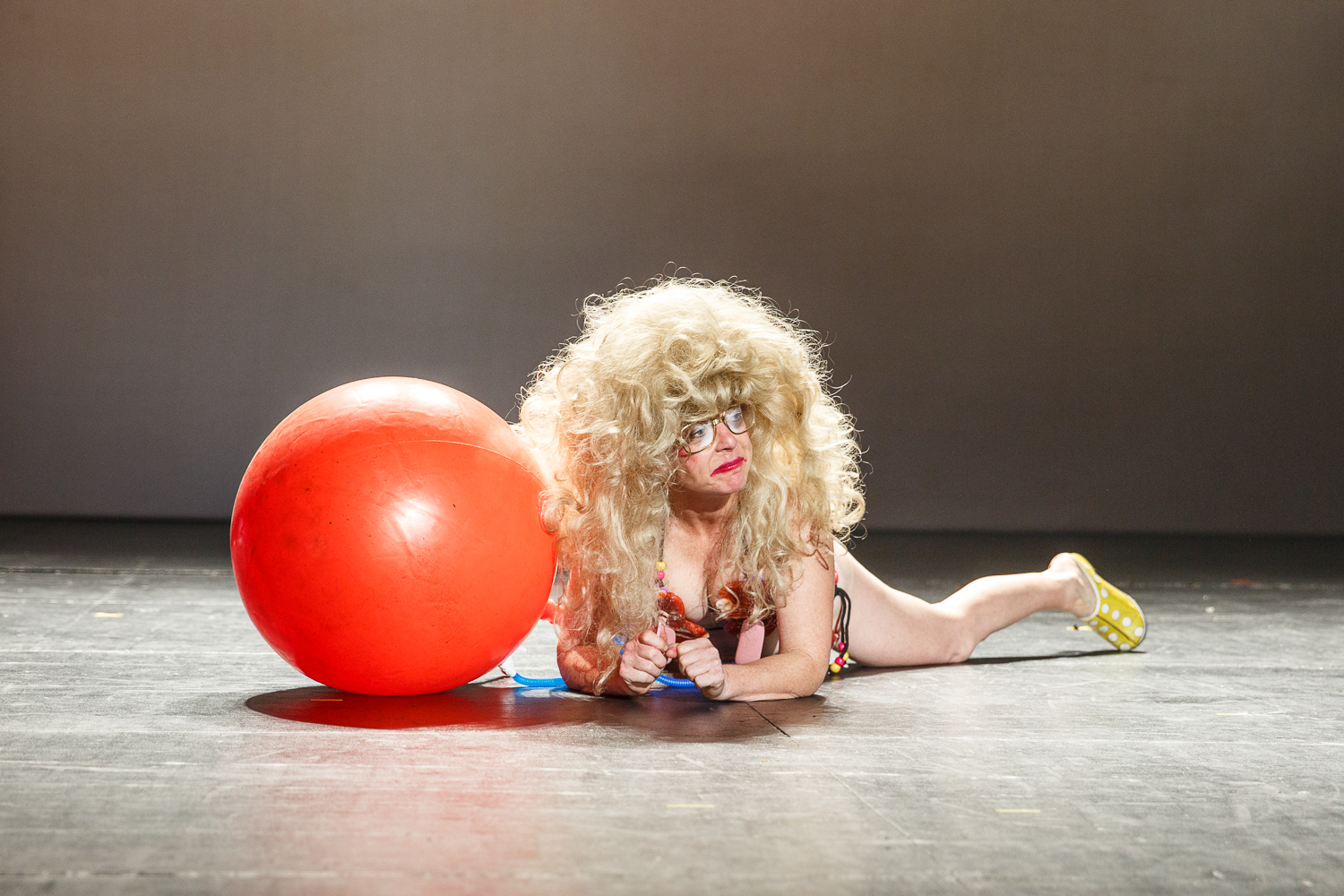