The iconic queer Festival has revealed a stellar line-up of entertainment for its major events including Parade, Laugh Out Proud, Queer Art After Hours and Laneway.

“Our queer artistic communities are uniting in 2022 to present an electrifying line-up of events for the Festival this year.”

“We have a truly incredible range of new events, from theatrical discoveries, community celebrations, to insightful talks and exhibitions. And of course, we have the return of much-loved Mardi Gras favourites such as Fair Day which was greatly missed in 2021.”

Highlights of the 2022 Festival include:

Sydney Gay and Lesbian Mardi Gras Parade
5 March 2022, Sydney Cricket Ground
In his first live performance in Australia in a decade, singer-songwriter Darren Hayes returns home to head up a superstar line-up for the 2022 Mardi Gras Parade at the Sydney Cricket Ground on Saturday 5 March 2022. Fresh off the back of the release of his new track: ‘Let’s Try Being In Love’, Haye’s Mardi Gras performance will mark his 20th year as a solo recording artist, as well the 25th anniversary of Savage Garden’s acclaimed debut, self-titled album.

Fair Day
Proudly presented in partnership with American Express. 20 February 2022, Victoria Park
The all-day rainbow extravaganza that kicks off the Mardi Gras Festival is back with a jam-packed day of community pride and celebration, hosted by Mon Schafter and Faustina Agolley. Fair Day isn’t just about stalls and the famous Doggywood Pageant – ABC Sydney presenter Josh Szeps will be broadcasting live from the park, and triple j will be crossing live throughout the day. ABC’s current and former hosts of RN Breakfast, Patricia Karvelas and Fran Kelly will also be hosting a special live edition of The Party Room from Fair Day’s Arena. As the sun begins to set, the entertainment heats up with performances by emerging and culture defying LGBTQIA+ artists – full line-up and program coming soon.

Laugh Out Proud
25 February 2022, Enmore Theatre
The queer comedy event of the year, Laugh Out Proud is a one-night-only showcase of the best rising stars in the Australian queer comedy scene. This year’s line-up features Charlie Lewin, Madeleine Stewart, Scout Boxall, Alex Ward and Zoe Sitas – with the night of bent belly laughs hosted by none other than Mel Buttle. Laugh Out Proud was a sell-out in 2020 and 2021, so get in quick to snap up your tickets.

Discover the ground-breaking and the glamorous in an explosion of innovative performance art, installations, collection stories, music and gallery tours inspired by this year’s theme of UNITED WE SHINE. Featuring Club Chrome, Demon Derriere, Jazz Money, Kim Leutwyler, Stereogamous and more to be announced, it’s a night to choose your own art adventure, serving sparkling till late.

Surry Hills Picnic 2022
4 – 6 March 2022
Surry Hills Picnic is an annual, community celebration connecting local businesses, venues and performers with residents, visitors and workers.  You can picnic in a participating venue or pickup delicious take away picnic pack offers and join friends at a local park to celebrate the Mardi Gras weekend.

The Future of Queering in Architecture
3 March 2022
Get online with the Gender Equity Transformation team (GET) of the Australian Institute of Architects for ‘Queering Architecture’: a panel discussion with a performative twist, critiquing contemporary design methods and their spatial implications from queer perspectives. With a phosphorescent line-up that questions what kinds of cities and spaces can be imagined if we celebrate our voices, talents, costumes, and rage!

Yesterday’s Heroes: The Golden Age of Gay
25 February – 5 March
The 1969 Stonewall riot and the publication of Dennis Altman’s Homosexual: Oppression and Liberation in 1971 were harbingers of a golden age of gay that was to last until the HID/AIDS crisis in the 1980’s. It gave rise to a gay aesthetic that challenged the heterosexual norm, celebrating the gay outsider status and difference. This exhibition celebrates many of the Sydney gay artists who contributed to this aesthetic.

Wendy Saddington Appreciation Society Happening
6 March 2022
Step back in time and discover the world of Australia’s first female rock star, Wendy Saddington, in an immersive soirée of archival media, music and projections, in tribute to her amazing life and career.

Small Town Boy
24 February – 7 March
Small Town Boy is an exhibition and personal reflection on 80s and 90s popular and queer culture, and what it has to say to us as we go through our second pandemic.

Welcome to the Yoniverse
18 February – 30 March 2022
By placing vaginas at the centre of her work, artist Katie Lloyd shines a light on female sex and sexuality, their bodies, and the importance of gender positivity in this powerful exhibition of ‘Yoni Art’.

Iridescent by Gerwyn Davies
19 February – 24 April 2022
In this exhibition, queer photographic artist and costume maker Gerwyn Davies responds to and reimagines the museums, archives, historic houses and gardens under the care of Sydney Living Museums and NSW State Archives. On 1 March, Davies presents an in conversation talk to share some of the historical inspirations for the exhibition.

Koori Gras
20, 25 & 26 February 2022
In partnership with Moogahlin Performing Arts and Mardi Gras, The Bearded Tit will be hosting Koori Gras in 2022. The first week of Mardi Gras will see a full day workshop with Tyra Bankstown and Phil Dean Walford covering make up and movement sessions. The second week will see two nights of Queer First Nations performers curated and hosted by Nana Miss Koori.

The Fannies Do Brunch
Every Sunday
Every Sunday, The Park presents Maxi Shield and Coco Jumbo. “The Fannies” will perform twice while guest enjoy a decadent breakfast display of delicacies in Darlinghurst’s newest urban garden sanctuary.

The Seven Gins of Pride
25 February 2022
The Seven Gins of Pride will take you on a colourful, twisted journey through… the history of Gin (hint: it’s all thanks to the gays!). This unique experience includes a two-hour masterclass on Gin and live performance. Expect plenty of innuendoes, laughs, quips and tips, plus a few camp songs from Frock!

Breaking the Code
10 February – 5 March 2022
Breaker of the Enigma code during the Second World War then publicly ostracised for being gay, eccentric genius Alan Turing is now lauded as a British hero. This acclaimed biographical drama is an elegant and poignant depiction of the life of an extraordinary man, his creativity, his yearning for love and companionship, and his deep humanity.

After Dark at The Hyde Park Barracks
24 February 2022
This regular late-night event transforms the UNESCO World Heritage-listed site with live music, ideas, installations and discussions. The first event for 2022 will celebrate the Sydney Gay and Lesbian Mardi Gras with a queer-friendly program that reflects and champions our diverse community.

Check out the full list of over 60 events on sale now at https://www.mardigras.org.au/program

Next ICYMI: Grill'd Has Gone Green 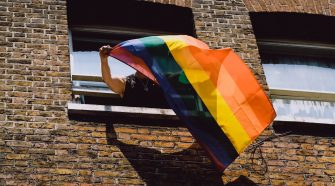