Reuben Kaye is ‘what happens when you tell your children they can be anything’, which acts both as a warm reminder and a threat to parents everywhere.

“I know exactly which way I’m pointing my knife: it’s fervently and strongly up instead of down, which I think is very different from a lot of comedies that I’ve seen – that I don’t like – which is a straight white man in a t-shirt pointing out the difference between men and women against a brick wall. We don’t need more comedy like that, we need comedy that’s progressive.”

And it seems his audiences agree. And with over 4.5 million views and 2 million likes on TikTok (the app, not the Ke$ha song, grandpa), Australia isn’t the only place he’s bringing the laughs, even if the reactions aren’t all positive.

“Even with all the positive, there’s still a fair number of neo-conservative haters who are using the response, ‘oh it’s just not funny’, to mask their homophobia as ‘comedy critiques’. People say, ‘this isn’t comedy’, and it’s like, ‘well, you know what? People are laughing, so…’. Comedy is not a genre that gets defined by people who either (a) aren’t doing it, or (b) who aren’t in the audience at that moment. If people are laughing then I’m sorry, mate, that’s comedy.

“And I think there’s power in saying what everyone is thinking. And, even though I’m at the bottom end of a marginalised community because I could essentially be a straight-passing white cisgender male, there’s still power as a queer person in saying it.”

Like most queer people, Reuben has gone through his own series of unfortunate events in his 36 years (please don’t sue us, Lemony Snicket, we really don’t have the money for that).

As a child, Reuben says, “my first performance was in the womb. The lighting was terrible, the entrance was amazing, and clean-up was obviously a b*tch. But I always knew I was going to do this, because I’d grown up with nothing but showbiz.”

Growing up, however, wasn’t a walk in the park. In fact, it was more like a marathon where your competitors are lions and – for some reason – you’re wearing Lady Gaga’s meat suit. Yeah…it was bad. He says, “school was horrible. Bullied relentlessly. Beaten up. Always in and out of the principal’s office, blah, blah, blah. And then I came out when I was 14 because I had no option, and because other people had eyes and ears, to basically almost the surprise of no one except my father, which was pretty heartbreaking. But you move on. And it wasn’t until I got out of school that I found my people.”

Acknowledging that there are kids still today going through the same thing he did in Melbourne in the 90s, Reuben advises, “school is just something – and nothing more – than a thing you have to survive. It’s going to be the smallest part of your life. It’s not going to matter once you leave it. It’s there purely for you to get through and find real people in the real world. It feels overwhelming and huge and it feels like it’s your whole world, but it’s not. Just know that there is a big wide world out there, filled with people who are your people, and you can find them online as well. And they will be your family. Sometimes families aren’t always families – sometimes you have to choose your family.”

Now, Reuben spends his time touring Australia, bringing laughs to all corners of the country. Normally, he’d be back and forth between Sydney and Melbourne, but since those cities have been COVID hotspots more often than not, he’s had the opportunity to go to places he’s never been before – something that he’s very excited about.

So, next time the amazing Reuben Kaye is in your neck of the woods, consider dropping by and watching him and his band perform (which are called The Kaye Holes, by the way) because he’s witty, he’s funny, he’s real, and he’s not afraid to tell it how it really is. And, to be honest, he’s the kind of comic we all need right now.

SPEED ROUND WITH REUBEN KAYE

Q: GO-TO COFFEE ORDER?
A: Oat milk latte with 5 sugars served in an origami crane and sprinkled with my own sense of entitlement (my kink is seeing baristas wince).

Q: FAVE BOOZY BEV?
A: Anything that dulls the pain of being ignored on the national census.

Q CELEB CRUSH?
A: I would like to crush many celebs but I have so little time.

Q: FAVE QUEER ARTIST/TALENT?
A: Jayne County… who else?

Q: FAVE SONG AT THE MOMENT?
A: My favourite song will always be Alone by Heart. It is perfection and I dare anyone to challenge me… Come at me bro.

Q: FAVE PLACE TO PERFORM?
A: In this current climate where artists and events are being devalued and abandoned by our government I don’t have the luxury to name my favourite place… ANYWHERE I GET TO PERFORM IS MY FAVOURITE BECAUSE IT COULD BE THE LAST SHOW FOR A LONG TIME.

Q: FAVE LGBTIQ+ VENUE?
A: My bed. Or any urban park with little to no lighting and a lot of shrubbery. And before you judge me, I’m not a sl*t. I’m a people person.

Next Wait, So You're Into Guys Now, Too? | Opinion 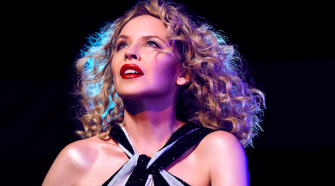 Taika Waititi, Kylie, Dannii Minogue to Guest Star on RPDR Down Under