Before we delve into Jack’s story, it’s important to contextualise this conversation a little.

This year, in 2022, we’re entering our fifth decade of HIV, and a lot has changed since the first case of HIV in Australia was (retrospectively) diagnosed in February of 1981.

Originally, HIV testing was non-existent. But by 1985, a type of test known as an enzyme-linked immunosorbent assay test was introduced in the United States. Sometime later, nucleic acid tests were introduced, which are performed in laboratories and take several days. Since then, 30-minute rapid antibody screening tests have become more widely available, with a number of organisations in major Australian cities (like RAPID in Queensland) offering these tests free of charge.

But even more recently, at-home rapid antigen tests and oral fluid antibody tests (like the one produced by Australian medical organisation ATOMO diagnostics) are being utilised. These HIV self-tests, available in a small number of pharmacies for $25, provide an accurate and convenient way to test for HIV, meaning that patients are able to seek effective treatment options as soon as possible.

This is his story.

“I don’t remember a lot of it…or much of that night in general. I was at [insert the name of a popular gay club here]. I had just finished a ball, and met my friend out. I remember talking to this person, and they kept buying me drinks. By the end of the night I was pretty intoxicated, so they offered to drive me home.

I got in his car, but because I was so drunk, I passed out and fell asleep while he drove me home. Then I woke up, and he was looking at me, and said, ‘I suppose you better thank me for those drinks’….and then he just, made a move. I wasn’t really into it. I didn’t really want to do it. but I still…I dunno…let him do it.

And I must have given him a weird look, because I remember him saying, “no, don’t worry about me…I’m on PrEP**…you don’t have anything to worry about’, sort of thing. And I was like, ‘okay that’s weird, I never asked you that but okay’.

But then, maybe five minutes in, I stopped it. And it really was only a few minutes. I said, ‘yeah, no, I don’t want to do this’, and then got out and went home. Two weeks later I became quite ill… because he actually had given me another STI as well, which is why I went to the doctor in the first place. I was so unwell. I couldn’t move, I was so tired, all my lymph nodes were swollen. It was alike a really bad flu. My doctor said, ‘yeah, we’ll give you a HIV test as well’, to which I agreed to, though I wasn’t really expecting  to do.

A few days later, I got a call, ‘Hey, we’ve got your results back…You should bring a friend’ and I was like ‘oh f**k’. And that’s when he told me. He’s said ‘this is what we found’. And at that point, my viral load was around 3 million, which is really high. And my docor explained ‘that’s how we know that you only contracted it recently…because you’re at the peak of your immune response’. That’s how I was sure it was that person. Because I hadn’t slept with anyone for months beforehand.

So, he referred me to a bunch of people, I started medication and then within a month, it was undetectable. So that was pretty good news.”

He says, “I dunno…I get really sad about it from time to time… just thinking about how it all happened. And how I should have just been more careful.

I think the worst part for me was that I was thinking about starting PrEP recently before this all happened, and I had tossed it up and thought ‘I don’t really have sex that much, so it’s not really worth it. I don’t really want to start it’. So I’ve had huge regrets about that, to be honest.

And just accepting it. It gets difficult sometimes because it’s a hard thing to learn.”

And when I asked him how his life had changed since being diagnosed with HIV, here’s what he had to say;

“It literally hasn’t, to be honest. And the only reason I get so upset about it is because there’s still so much stigma around it, I think. The conversation is changing. A lot of people are becoming educated on it now, but it’s still just something that some people still will never accept.

That’s the only reason why I get upset about it. Other than that, I just see a doctor more frequently, I get more blood tests, and look after my sexual health a bit more than I was before.

Basically, it’s not a death sentence anymore, which is the first thing my doctor told me when I found it. So, I just live normally. It’s literally like another lifestyle disease. Like if I had diabetes, it’d be this exact same. I just get on with life.

I do take more care of my health than it was back then. Like I’m more active and fit. But I think that’s just become my lifestyle now. It wasn’t because I had HIV that I decided to become more active. It’s just sort of evolved to that point”.

He begins by saying that, “well, my doctor was really good. Straight away he admitted, ‘this isn’t my specialty, but these are the people I’m going to refer you to’. And then he referred me to the Biala City Community Health Centre on Roma Street, and they were really good.

And even here [in rural Queensland where Jack now lives] the doctor here that I see has been really good….really knowledgeable. So yeah, it’s been pretty good”.

Jack then goes on to recall a time when the healthcare system was less than adequate.

“There was this one time”, he says, “where I slept with someone (unprotected). And I told him beforehand ‘by the way, I have HIV but am undetectable’ and he was like, ‘yeah, okay’, and still slept with me. And then the next day, he started freaking out. And I was like, ‘look, there’s this hotline, you can call, and you can get what they call post-exposure prophylaxis (PEP***)’, and so he called that hotline.

And then he explained to the nurse on the hotline, ‘look, I just had sex with a person who’s undetectable, and he told me it’s not transmittable…because u=u?’ and the nurse said, ‘I’ve never heard of that before…That doesn’t make sense to me…I don’t understand how that works’. So she’s on a HIV hotline telling people that she doesn’t know about u=u****. I was shocked at that. I was like, ‘how is this nurse still working on this hotline? Telling people that u≠u’.

So that just freaked him out even more. But that was my one experience with the healthcare system. I was like, ‘this is just not good enough. You’re going to be telling people that you don’t know about that?’”.

Before we finished our chat, I asked Jack if he had anything else he wanted to share. He said, “I think it’s really important to educate people on it. And if I were to give anyone any advice – if they were tossing up between starting PrEP, and not…just seriously do it. Don’t put it off any further. All it takes is one person on one random night to change your life forever. That’s my biggest piece of advice.

* Believe it or not, Jack’s name isn’t really Jack. His name has been changed to protect his identity.

** PrEP stands for Pre-Exposure Prophylaxis; a class of antiretroviral drugs people take to protect them and prevent HIV infection. When used as prescribed, PrEP is highly effective at preventing HIV infection.

*** PEP, as opposed to PrEP, is Post-Exposure Prophylaxis, a course of antiretroviral medication you can take to prevent HIV infection if you have potentially been exposed to HIV.

**** u=u is an abbreviation of the words ‘undetectable equals untransmittable’. It refers to the fact that people who take antiretroviral therapy for HIV daily as prescribed, and who achieve and maintain an undetectable viral load, cannot sexually transmit the virus to an HIV-negative partner.

Previous Interview with Alex the Astronaut 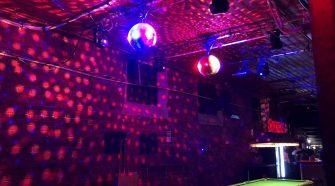