The tiny South-east Asian country of Brunei, ruled by Sultan Hassanal Bolkiah, has today introduced the harsh new penalties, after more than 50 years in power.  The strict new legislation means that sodomy — whether between two men or an unmarried heterosexual couple — can be punished by 100 stokes of a whip, or being stoned to death.

Under the new regime, adultery attracts the same forms of punishment, but as with sodomy it applies only if the accused admits their involvement or at least four eyewitnesses testify. Homosexuality was already illegal in Brunei, though under the new legislation, the punishment has drastically increased from a crime punishable by up to 10 years in jail, to a crime punishable by being stoned to death or whipped with 100 strokes.

A gay Bruneian man, who did not want to be identified, told the BBC, “You wake up and realise that your neighbours, your family or even that nice old lady that sells prawn fritters by the side of the road doesn’t think you’re human, or is okay with stoning.”

The Australian Government has actively condemned the new laws, which have been described by the United Nations as “cruel and inhuman”, with Foreign Minister Marise Payne highlighting Australia’s opposition to the death penalty “in all circumstances”.

“I conveyed our views as recently, again, as last week to Erywan, the Foreign Minister of Brunei and we will continue to do so,” she said.

Celebrities Ellen Degeneres, George Clooney and Elton John are all joining a global boycott of a luxury international hotel chain, owned by the Sultan, and a petition has been set up calling on the Government to ban Royal Brunei Airlines from flying to Australia.

You can sign the petition to an Royal Brunei Airlines from flying to Australia here.

Next What's On Sydney // Kweens of Comedy

What is Pride Month? And How To Celebrate It 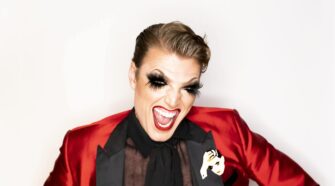