She is the pop star. She is the drag queen. She is the moment. She is Grag Queen. And she is our reigning ‘Queen of The Universe’. In this interview, Grag talks serving glamour at Drag Con, new music, ‘Love Victor’ and what she splurged her winnings on.

Late last year, the 26-year-old Brazilian bombshell took home the crown on the inaugural season of ‘Queen of The Universe’ which, if you’re late, is a ‘Drag Race’ meets ‘Eurovision’ extravaganza.

Week after week, Grag (@gragqueen) stunned both judges and audiences alike as she showcased her infectious personality, drag and versatile vocals, adding her own unique flare on tracks like Andra Day’s ‘Rise Up’, and Cindy Lauper’s ‘Girls Just Want to Have fun’.

Grag walked away from the show with a crown, a newfound fan base and 250K in the bank. If you’re wondering what she splurged on when that bank transfer hit, Grag says, “It was a human (hair) wig.”

She explains that she wanted to reward her drag persona, “Grag won the prize, so I thought it was fair. Like I gotta spend this money with her ass first.”

The queen who’s quickly risen through the drag ranks since beginning in 2018 chats about how winning the reality TV competition has altered her life, “It did change a lot. Mainly because of the budget. Now I can put money to into my projects and my music videos.”

Alongside the boost in income, Grag declares that wasn’t the only transformation that took place on the show, “I just ended up being extremely more confident than I was in the beginning of the competition because it validates lots of feelings and doubts that we as queer artists have and so yeah, it changed 100%.”

This May, Grag had the opportunity to fulfill one of her ,“biggest dreams”, making her first appearance at RuPaul’s DragCon, an event she’d only fantasized of attending as a guest while she’d glide around booths meeting her favourite queens.

In the blink of the eye that dream was now a sweet reality with Grag as the main attraction.

And what happens when you put a bunch of drag queens in the same place? Drama! Controversy arose when the sometimes problematic and always iconic shit-stirrer Gia Gunn tweeted, “Say what you want but I saw 0 beauty at this year’s DragCon…what happened to the glamour?” (Click here to see the iconic tweet in all its glory).

Grag, who was, in fact, serving glamour, jokingly retorts, “I want you [Gia] to show me your cash prize and your crown.”

The bilingual Brazilian is famous for her adlibs and thick accent which she unapologetically flaunts throughout her music. Nevertheless, will she continue to do so now that she’s been exposed to such a large English-speaking audience?

“I love using love using two languages (in music),” she says, “I think it’s something very unique, and I think I’m going to keep doing that.”

That effervescent and unapologetic individual has caught the attention of those in high places, including the producers of the coming-of-age TV series ‘Love Victor’. The forthcoming third season of the gay centred comedy will feature a track from the artists upcoming releases. Grag says the opportunity “is extremely huge for me. It’s so far from where I was before.”

Elaborating, Grag says that it’s been a, “pleasure to represent Brazilian artists,” and to be a part of the project. She explains, “being invited to these kinds of things, [receiving] these kinds of emails that I’ve been receiving, like [the ones] followed by @disney.com…I’m so honoured.”

Looking towards Grag’s future, she’ll be releasing an album (very) shortly. But this one will feature more English than ever before.

She explains, “I’ve been working with lots of good people here in the US to make some good songs. Especially because I’m not an English speaker, you know? So, I really need help and I’ve been working with lots of legends like Leland and Justin John. But I’m still understanding what the fans want from me. Of course, I’m going to give looks and vocals and beauty and versatility.”

Music aside, the winner wants to spread her own brand of unique energy with world during her reign, and if there were ever to be a ‘Drag Race: Brazil’, Grag would love to throw her human hair wig into in contention for the hosting gig. 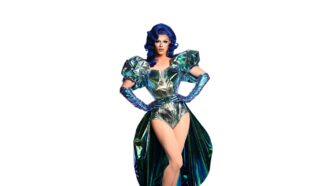